India "Priest" Of World Peace, But Capable Of Replying To Aggression: Rajnath Singh

"We seek world peace (but) if someone shows us an aggressive attitude, we will respond," Rajnath Singh said, adding the "new roads will help secure international borders." 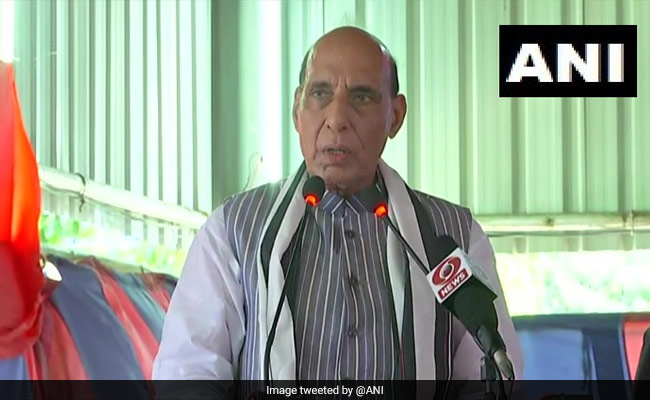 In a statement seen as an implicit message to Beijing, Defence Minister Rajnath Singh on Thursday said that though India is a peace loving country, it has the capability to reply to aggression.

Dedicating 12 strategic roads constructed by the Border Roads Organisation (BRO) to the nation, Mr Singh described India as a priest of world peace but added any serious disturbance to peace and tranquility in border areas would have adverse implications.

"We seek world peace (but) if someone shows us an aggressive attitude, we will respond," Mr Singh said, adding the "new roads will help secure international borders."

Mr Singh's statement comes in the backdrop of China continuing to hold on to positions in Hot Springs and Gogra Post on the border, after clashes between the armies of the two Asian giants in the bleak Galwan valley in Ladakh a year ago.

The defence minister said "last year in Galwan Valley, our soldiers displayed exemplary courage and valour in line of duty. I salute all brave soldiers who laid down their lives fighting for the nation."

China also claims most of Arunachal Pradesh as its territory and has dubbed it South Tibet in internal maps.

The northern neighbour which fought a bloody border war with India in 1962 when it invaded parts of Arunachal pradesh including Tawang, often sends border patrols into areas controlled by India.

In September last year, five young Arunachali hunters were allegedly kidnaped by Chinese troops from Sera-7, in Upper Subansiri district of Arunachal Pradesh. The youth were later released in Anjaw district, around 800 km from the state capital, after several days in Chinese custody.

With no let up in India-China border tension, the Modi government is now looking to expedite work on border infrastructure, especially on roads leading to forward areas in the frontier state.

Mr Singh said, the 12 strategic roads including 10 in Arunachal Pradesh and one each in Ladakh and Jammu & Kashmir, inaugurated during the day, would not only give a boost in connectivity but would facilitate faster movement of troops along the international border.

"The capability of BRO in constructing world class roads despite challenges, in tough and hilly terrain, (underlines) the mantra of Atma Nirbhar Bharat," Mr Singh said while lauding the road construction unit for its dedicated work.

He said the road projects are part of the Act East Policy, envisioned by Prime Minister Narendra Modi.

"The budget for BRO has increased manifold since 2013 and today stands at Rs 11,000 crore. The BRO since 2014 had developed a record 4,800 kilometers of border roads in the country," the Defence Minister said.

He added that the country's defence sector in the last few years had witnessed major changes including appointment of a Chief of Defence Staff for the first time.

"Our vision is to produce our own weapons and if necessary export them to other countries," he said.

The defence minister also claimed that development work in Northeast India had picked up pace under the Narendra Modi Government.

The development of the region remained stagnant after independence. However, after NDA came to power in 2014, the region witnessed accelerated development. There are many challenges due to its close proximity with foreign countries, Mr Singh said.

According to BRO officials, out of the 12 roads inaugurated on the occasion, ten road projects of total 285.32 kilometers, are in Arunachal Pradesh being constructed by the BRO at an estimated cost of Rs 1,228.34 crore.

Of the ten road projects, three each are under Project Arunank, Vartak and Udayak while one is being executed by Project Brahmank, officials added.

Union Minister of State (Independent) for Sports and Youth Affairs Kiren Rijiju, who was also present on the occasion, lauded the BRO for completing work in rough terrain within timeline constraints.

Assam Chief Minister Himanta Biswa Sarma speaking on the occasion added that though the roads were constructed in Arunachal Pradesh, they would benefit the entire northeast and the country.

Arunachal Chief Minister Pema Khandu termed the occasion as a proud moment for the state as world class roads have been constructed up to the border.

Mr Khandu exuded confidence that in the coming days, the north east region would witness more development with the blessings of the Centre.

Chief of Defence Staff Gen Vipin Rawat, Director General of Border Roads Lt General Rajeev Chaudhry, state Chief Secretary Naresh Kumar were among others who were present on the occasion.