India Priest Of Peace But Knows How To Give Fitting Reply To Aggression: Rajnath Singh

Defence Minister Rajnath Singh was speaking at an event in Assam during which he dedicated to the nation 12 roads built by Border Roads Organisation. 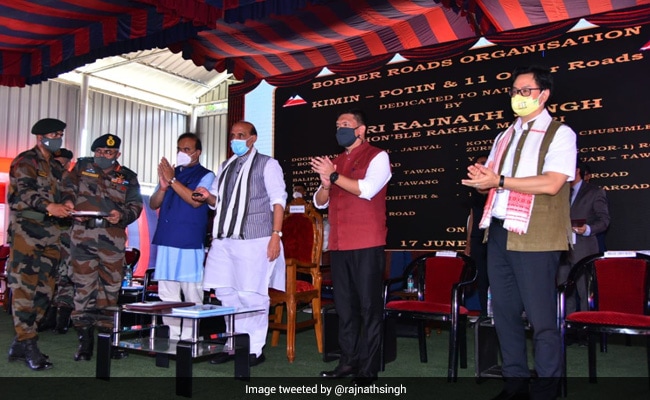 Defence Minister Rajnath Singh today said India is a "priest" of peace but knows how to give a befitting reply to any act of aggression.

The Defence Minister was speaking at a government event in Assam's Lakhimpur district during which he dedicated to the nation 12 roads built by the Border Roads Organisation (BRO) along the northern and eastern borders of the country.

Among these is the 20-km Kimin-Potin double-lane road in Arunachal Pradesh, nine other roads in the state and one each in the Union Territories of Jammu and Kashmir and Ladakh.

Mr Singh said any disturbance in the peace and tranquility of border areas is bound to have adverse implications.

"The 12 strategic roads would not only boost connectivity, but also facilitate faster movement of troops along the international border. The ability of the BRO to construct world-class roads despite the challenges in tough and hilly terrain demonstrates the mantra of Atmanirbhar Bharat," the Defence Minister said.

Saying that the Northeast is known for its diversity, the Defence Minister said the region did not see development for a long time. "The way the Northeast has developed under the leadership of Prime Minister Narendra Modi, no matter how much it is appreciated, it will not be enough," he said.

The Defence Minister also paid tribute to the soldiers killed in the clash between Indian and Chinese troops at Galwan Valley in eastern Ladakh.

"Last year, in Galwan Valley, our soldiers displayed exemplary courage and valour in line of duty. I salute all brave soldiers who laid down their lives fighting for our nation," Mr. Singh said.