India pieces together details of Pakistan's grim attack on jawans 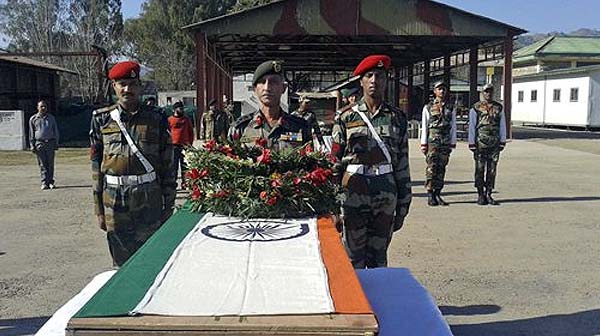 New Delhi: India has severely reprimanded Pakistan for Tuesday's killing of two soldiers in Kashmir. One of them was beheaded. India summoned Pakistan's High Commissioner Salman Bashir and lodged a strong protest on Wednesday.

Islamabad has retaliated by denouncing India's allegations as unfounded; a statement warned against the dangers of spreading "negative propaganda".

Both sides also emphasised on record that it is essential to prevent the crisis from escalating.

Sources said India has told Pakistan that repeat of the attack will lead to serious consequences which Pakistan "will have to bear". New Delhi has also told Islamabad that the mutilation of the bodies of soldiers is against the established rules of engagement of any professional army.

Prepared for Pakistan's denial, India has pieced together the grim details of the audacious attack on Indian territory.

According to details reaching New Delhi, a seven-member patrol of the Indian army was moving near Mendhar, about 220 km north of Jammu, in thick fog at 11 am in an "area domination exercise". The patrol was ahead of the fence along the Line Of Control (LoC) but within demarcated Indian territory. Lance Naik Hemraj and Sudhakar Singh were leading the patrol.

"They (the patrol) faced fire almost immediately," sources told NDTV. The firing continued for about an half hour. The mutilated bodies of the soldiers were recovered nearly an hour later by the Indian Army.

India believes that Pakistan's 29 Baloch Regiment led the attack and that troops from the elite Special Services Group (SSG) killed the Indian soldiers.

Pakistan too has accused Indian troops of crossing the Line of Control on Sunday (January 6) and raiding one of its army posts. It says a Pakistani soldier was killed in the firing. India has denied the accusations.

India maintains that it had not crossed the LoC but had retaliated after being fired upon by Pakistani soldiers without any provocation.

Besides this latest incident, what is worrying New Delhi is the steady increase in the instances of  violation of the November 2003 Cease Fire Agreement along the disputed Line of Control (LoC) and the well-demarcated and accepted International Border (IB) in Jammu and Kashmir.

The number of recorded ceasefire violations in 2012 stood at 117 as against 60 the year before and only 57 in 2010. Top Indian Army officials say that in December 2012 alone there has been as many as 10 cases of ceasefire violations along the LoC and four infiltration attempts by terrorists.

India is not viewing the rising violations of the Cease Fire Agreement with Pakistan in isolation. New Delhi feels it is influenced by America's Af-Pak policy and the impending US withdrawal from Afghanistan in 2014, a senior official said.

Promoted
Listen to the latest songs, only on JioSaavn.com
With its western flank secured after the withdrawal of the US-led International Security Assistance Force (ISAF), India believes, Pakistan will have more resources to spare and that these will be used against India. "Pakistan will also assert itself against India and J&K would be the focal point", the official added.