A Pakistani official has claimed that a meeting between Ajit Doval and his Pakistani counterpart Nasser Khan Janjua came two days after Indian national Kulbhushan Jadhav, who has been sentenced to death by a Pakistani military court, met with his family in Islamabad on December 25. 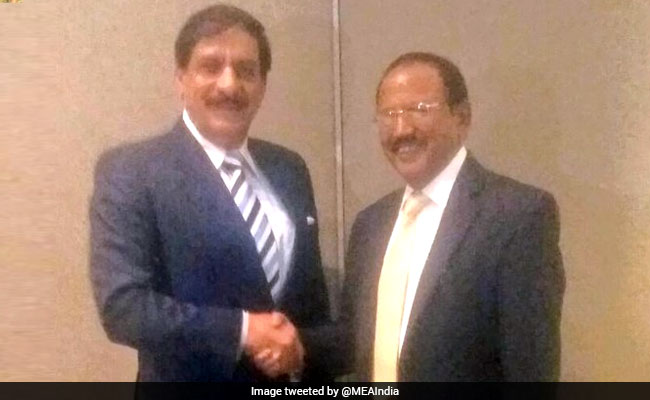 Islamabad: The National Security Advisors of India and Pakistan have held a "secret" meeting in Thailand, a senior Pakistani official said today.

According to a report in Pakistani newspaper Dawn, an official from Pakistan's national security division, on the condition of anonymity, said the meeting between National Security Advisor Ajit Doval and his Pakistani counterpart Lt Gen (retd) Nasser Khan Janjua took place on December 27 in Thailand.

He said he was told that the meeting was useful and even claimed that it might help in restarting some sort of engagement at the diplomatic level as well, the report stated.

According to the Pakistani official, the meeting came two days after Indian national Kulbhushan Jadhav, who has been sentenced to death by a Pakistani military court, met with his family in Islamabad on December 25.

While Pakistan claimed that its decision to allow Mr Jadhav's family to travel to Islamabad to meet him was a humanitarian gesture, India has slammed Pakistan for violating mutual understandings, asserting that Mr Jadhav appeared coerced and under considerable stress during the tightly-controlled interaction.

India has also slammed Pakistan of disregarding cultural and religious sensibilities of family members under the pretext of security.

Mr Jadhav was sentenced to death by a Pakistani military court for alleged espionage, an accusation that India has dismissed as concocted. New Delhi says Mr Jadhav was kidnapped in Iran, where he had legitimate business interests, and brought to Pakistan.

To save Mr Jadhav, India moved the International Court of Justice, which ordered Pakistan in May to stay his execution.
Comments
Ajit DovalNasser Khan JanjuaIndia-Pak National Security Advisor Meet