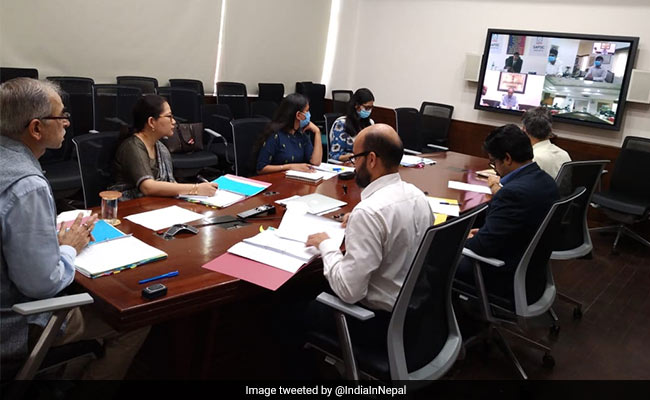 The meeting of India-Nepal Joint Working Group was held via video conferencing. (File)

India and Nepal had a Joint Working Group meeting last week, during which the two sides discussed future areas of cooperation in the petroleum energy sector, including possibilities of new pipelines for supply of petroleum products to the Himalayan nation, said the Indian embassy on Saturday.

The second meeting of India-Nepal Joint Working Group (JWG) on oil and gas cooperation was held through video conferencing on August 13, the embassy said in a statement.

Representatives from the Embassy of India in Kathmandu, Indian Public Sector Oil and Gas companies such as IOCL, GAIL and HPCL, Ministries of Finance and Foreign Affairs of Nepal and Nepal Oil Corporation (NOC) participated in the JWG meeting.

"The meeting expressed satisfaction on functioning of the Motihari-Amlekhgunj Petroleum Products Pipeline, which was jointly inaugurated and operationalised by Prime Ministers of both countries in September 2019," the release stated.

The pipeline, first of its kind in South Asian region, has been supplying the majority of the fuel requirement of Nepal to Amlekhgunj Depot of NOC.

"Both sides also discussed future areas of cooperation in the petroleum energy sector, including possibilities of new pipelines for supply of petroleum products to Nepal," the release stated.

"Both sides encouraged their respective companies to work closely for expanding engagement in the petroleum sector," it added.

The JWG mechanism was set up in 2017 to further strengthen the long-standing cooperation between IOCL and NOC and diversify areas of cooperation between the two countries in the oil and gas sectors. The first meeting of the JWG was held in January this year in New Delhi.