External Affairs Minister S Jaishankar and his Nepalese counterpart Pradeep Kumar Gyawali discussed cooperation in a range of areas including economy and trade, border management and tourism among others, an official statement said. 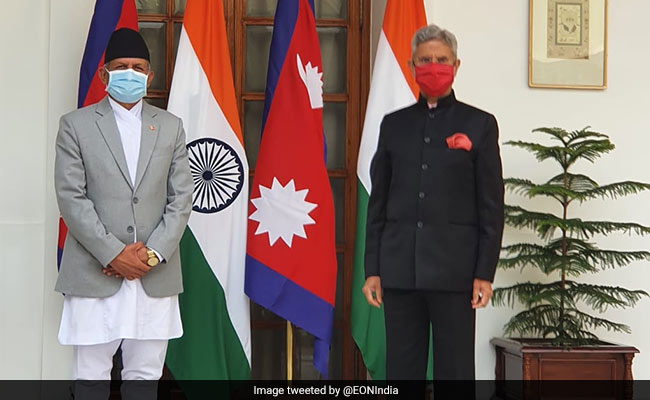 Foreign ministers of India and Nepal on Friday held a comprehensive review of all aspects of bilateral ties and explored ways to further strengthen cooperation in key areas of connectivity, trade and energy, in the first high-level engagement between the two nations after relations nosedived following a boundary row last year.

The 6th meeting of Nepal-India Joint Commission has started at Hyderabad House in New Delhi. Hon Foreign Minister @PradeepgyawaliK and the External Affairs Minister of India, H.E. Dr S. Jaishankar are leading the respective delegations which consist of... pic.twitter.com/DCYoKH02WX

Ties between India and Nepal came under severe strain after Nepal last year published a new political map that showed the three Indian territories - Limpiyadhura, Kalapani and Lipulekh - as part of Nepal.

In the statement, the Ministry of External Affairs (MEA) mentioned border management among several areas of cooperation that the two sides discussed in the meeting. However, it was not immediately known whether the dispute over the three areas figured in the talks.

It said the close cooperation between the two sides in combating COVID-19 pandemic in the region was noted, and Nepal congratulated India on the "remarkable success" in production of Covishield and Covaxin vaccines and requested for early provision of vaccines to Nepal.

"The Joint Commission comprehensively reviewed all aspects of multifaceted cooperation between the two countries and explored ways to further strengthen the traditionally close and friendly ties," the MEA said.

The MEA said the "significant and concrete" progress made since the last JCM in taking forward several bilateral initiatives was also acknowledged.

Describing the Motihari-Amlekhganj petroleum products pipeline a "milestone", the MEA said the two sides discussed its expansion to Chitwan and the establishment of a new pipeline on the eastern side connecting Siliguri to Jhapa in Nepal.

"Both sides welcomed the completion of the work on the first passenger railway line between India and Nepal from Jaynagar to Kurtha via Janakpur, and noted that operating procedures for commencement of train services were being finalised," the MEA said.

The MEA said the JCM emphasised the need to facilitate cross-border movement of people and goods.

It was noted that the recently inaugurated Integrated Check Posts (ICPs) at Birgunj and Biratnagar have helped in seamless movement of people and trade between the two countries.

"Both sides welcomed the commencement of construction of third ICP at Nepalgunj. India conveyed that construction of new ICP at Bhairahwa would be initiated shortly," it said.

"Discussions were held on expediting joint hydropower projects, including the proposed Pancheshwar Multipurpose Project, which have numerous benefits for the people of both countries," it added.

During the meeting, India conveyed that it would undertake two more cultural heritage projects in Nepal, namely, the Pashupatinath Riverfront Development and the Bhandarkhal Garden Restoration in Patan Durbar, with grant assistance, the ministry said.

"Both sides also exchanged views on international, regional and sub-regional cooperation. Nepal expressed support for India's permanent membership of an expanded UN Security Council to reflect the changed balance of power," it said.