During that period Singapore was a direct source of investments into India. Its financial market was a major source of capital. 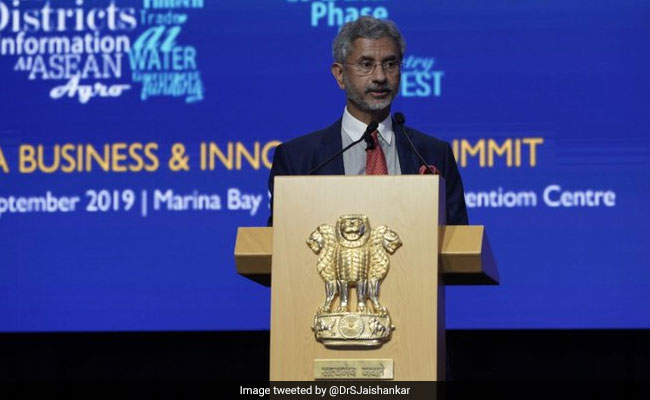 India looks at an open, inclusive and balanced region connected by secure seas, integrated by trade and investment, underpinned by the rule of law, External Affairs Minister S Jaishankar said on Monday, as he sought Singapore's support in addressing the challenges posed by the changing world.

Addressing the inaugural session of India Singapore: The Next Phase of Strategic Partnership, S Jaishankar said, "There is no hegemonic power to underwrite an international order but nor is there a global compact among nations. The international situation today is under stress."

In geopolitics, it's not only the rise of China and the sharper competition between the United States and China but the simultaneous rise of several countries, the promise of an Asian century whose rise still has challenges to overcome, he said.

"We do see multilateralism in retreat. There are question marks about the effectiveness of institution that we have set up in the last 50 years," he said.

Highlighting Prime Minister Narendra Modi's vision, S Jaishankar said, "We look at an open, inclusive and balance region connected by secure seas, integrated by trade and investment, underpinned by the rule of law and anchored in ASEAN unity and centrality with East Asia Summit as its principal forum."

His comments came amidst China flexing its muscles in the strategic Indo-Pacific region.

"We are poised at a very important juncture in the world politics. It is not obviously an easy time, but also not a disheartening time. I think a lot would depend on the imagination and the dexterity with which we together address many of the challenges," he said.

Recalling India's ties with Singapore, S Jaishankar, who was earlier posted in Singapore as the high commissioner said, "When we came together in the contemporary phase of our relationship, it was the time when the world was changing and India was changing.The two changes had something to do with each other."

"At that time India was facing severe balance of payments crisis and was embarking on radical economic reform. Then world was changing and the Cold War was coming to an end."

"It was very clear that a lot of assumptions on which the world was working had to be revised. In that situation, India turned to Singapore and Singapore responded. We had the Look East Policy. Singapore then became a key partner in India''s growth and development," S Jaishankar added.

It also became a bridge to this region, he said.

"In 1992, India launched the India-Asian partnership and by 2005 we were members of the East Asia Summit," the minister said.

During that period Singapore was a direct source of investments into India. Its financial market was a major source of capital. Singapore was the first country with whom India signed a Comprehensive Economic Partnership Agreement, he said.

"We have a robust defence relationship. We have just completed 25 years of uninterrupted naval exercises which I think is the longest India had with any country. Now we have extended it as a trilateral with Thailand," he said.

"In political, strategic as well as economic and commercial areas, Singapore has become a fulcrum for India's policies east of India. Today, what started as a bilateral relationship is something that has grown very much bigger," he said ahead of his meeting with the leaders of the country.

He said India and Singapore think similarly on key issue like rule-based issues.

"We are again at another cusp, this provides another opportunities to further our relationship," he said.

"Beyond the traditional areas of cooperation, we have entered the digital age with its own opportunities. The area of fintech needs to be explored. India is a country of SMEs in many ways. When we look at trade and negotiations like the Regional Comprehensive Economic Partnership which is underway, it is important both economically and strategically trade agreement is a balance of negotiated interests," S Jaishankar said.

He said connectivity is another important aspect of bilateral agenda.

S Jaishankar said it is important how do "we engage each other in a different but much more integrated landscape between the Indian Ocean and the Pacific Ocean."