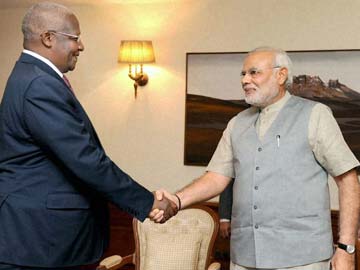 Kutesa conveyed a message of felicitation to the Prime Minister from Ugandan President Yoweri Museveni on his electoral victory and an invitation to him to visit Uganda.

Modi thanked Kutesa for the message from Museveni. He accepted the latter?s invitation to visit Uganda with pleasure and also requested the Ugandan Foreign Minister to convey his invitation to President Museveni to the 3rd India-Africa Forum Summit to be held in India later this year, a PMO statement said.

Kutesa expressed Uganda's desire to build on excellent relations between the two countries, whether bilaterally or in multilateral platforms, by working with the new Government of India, the statement said.

He underlined the potential for developmental cooperation between India and Uganda in the fields of investment, ICT, hydropower and capacity-building.

"The Prime Minister reaffirmed India's desire to join hands with Uganda for development partnership in all fields," the statement said.