India is Proud of its Navy, Says PM Narendra Modi on Navy Day 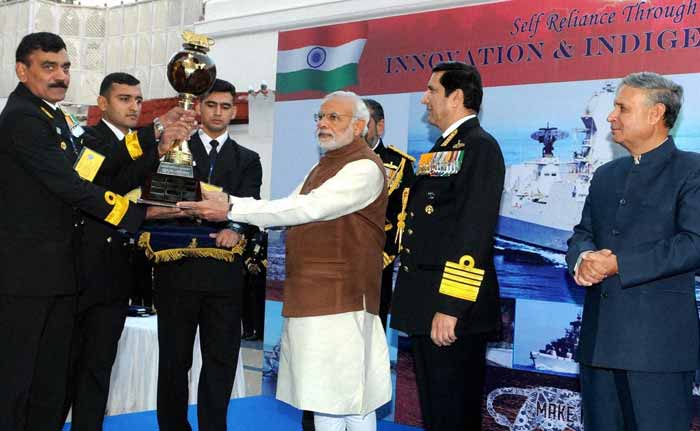 Prime Minister Narendra Modi presents innovation trophies to awardees, during the At Home reception, organised by the Chief of Naval Staff in New Delhi on Friday, December 4, 2015. (Press Trust of India photo)

"India is proud of a strong and valiant navy that has always risen to the occasion to protect our nation. Navy Day greetings to navy personnel," Mr Modi tweeted.

At a function at Admiral Dhowan's residence in the national capital later, the prime minister gave innovation trophies to four awardees.

The prime minister was also given a demonstration of salient innovations and indigenisation initiatives by young personnel of the Indian Navy, during the Navy Day reception.

A 'Innovation and Indigenisation Pavilion' over an approx area of 3,000 square feet showcased live demonstration of technological innovations and indigenisation initiatives in combat technologies, in a set-up that mimics the operations room of a warship at sea.

The displays included live demonstration of use of Naval Satellite 'Rukmani' to provide telemedicine solution for patients aboard ships at sea and medical specialists at naval hospitals ashore, models of indigenous ship and submarine design capabilities and demonstration of award winning innovations.

"The end objective is to effectively use the power of innovative problem solving as a force multiplier and redouble the momentum towards 'Self Reliance through Indigenisation and Innovation'," a statement from the navy said.

December 4 is celebrated as the Navy Day in India to commemorate the start of Operation Trident during the India-Pakistan War of 1971.