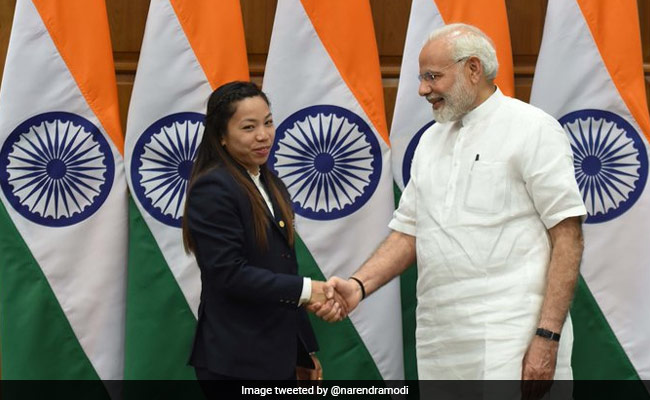 "Could not have asked for a happier start to @Tokyo2020! India is elated by @mirabai_chanu's stupendous performance. Congratulations to her for winning the Silver medal in weightlifting. Her success motivates every Indian," PM Modi tweeted with #Cheer4India #Tokyo2020.

Could not have asked for a happier start to @Tokyo2020! India is elated by @mirabai_chanu's stupendous performance. Congratulations to her for winning the Silver medal in weightlifting. Her success motivates every Indian. #Cheer4India#Tokyo2020pic.twitter.com/B6uJtDlaJo

The athlete from Manipur broke down after realising that she has secured a medal and hugged her coach in jubiliation. She later broke into a dance too to celebrate the historic podium finish.

Congress leader Rahul Gandhi congratulated Mirabai Chanu for the country's fist medal on the very first day at the Olympics.

"We're so grateful to you and you inspire the entire India, our Indian contingent in #TokyoOlympics and I'm sure the way you started on day 1, the other athletes are going to follow this and they are also going to make India proud," new Sports Minister Anurag Thakur was quoted by news agency ANI.

What a day! What a win for India. Mirabai Chanu wins silver in Weightlifting Women's 49kg category, India open tally in Tokyo Olympics. You have made the country proud today.

Congratulatory messages flooded in from all quarters. Here's a look at a few of them.

Congratulations to pride of India and #NorthEast@mirabai_chanu on bagging #silver in Women's 49 kg category & giving us our first medal in #Olympics2021.

You have a long way ahead. Keep shining! #OlympicGamespic.twitter.com/axwwrAaAwR

Congratulations to @mirabai_chanu for winning silver medal in weight lifting. This is first medal for India in Tokyo Olympics. Every Indian is proud of you. pic.twitter.com/f8cFSX3HsK