Venkaiah Naidu further said that South India has all it takes to become a 1.5 trillion economy by 2025. 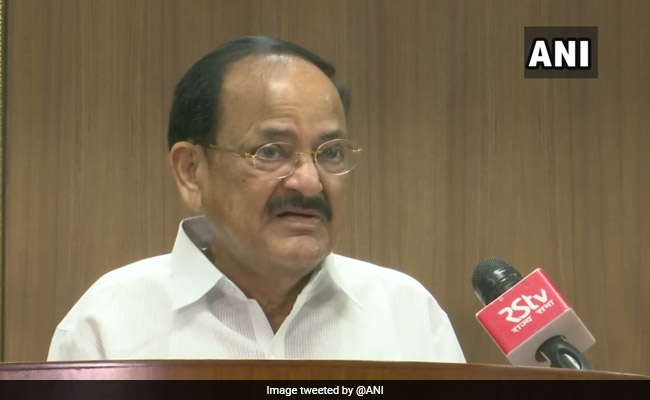 Venkaiah Naidu said that South India has all it takes to become a 1.5 trillion economy by 2025. (File)

India is now at a decisive point in regaining its economic growth, said Vice President M Venkaiah Naidu on Thursday while virtually addressing a summit.

Addressing 'Mystic South - Global Linkages Summit' organised by the Confederation of Indian Industry (CII), Vice President Naidu said, "India is now at a decisive point in regaining its economic growth. Now is the time for all the stakeholders to join hands and ensure sustained momentum. The industry should work with the government on various reforms that need to be implemented with greater vigour."

"Global trends such as automation, shifting supply chains, demographic changes and a greater focus on sustainability and health are assuming a new significance in the wake of the pandemic. For India, these trends could catalyse growth and become the hallmarks of the post-pandemic economy," he added.

Mr Naidu further said that South India has all it takes to become a 1.5 trillion economy by 2025. "The region is a classic example of 'Unity in Diversity', and combines manufacturing with services, culture with modern values and education with skills. The culture of South India is one of its biggest strengths and should be used as a soft power to bring the world to its doors," he stated.

He also lauded India's performance in the 'Ease of Doing Business' rankings.

"Entrepreneurship has always been a strong point for Southern success. Start-ups have also started flourishing in smaller cities of the region. I am pleased to know that the Southern States are amongst the top in the 'Ease of Doing Business' rankings in India," Mr Naidu added.

This Karnataka Professor Is On A Mission To Promote Punjabi