India in 'Dereliction of Duty' Over Rapes: UN Watchdog 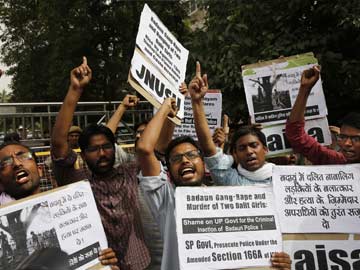 Members of Jawaharlal Nehru University Students Union shout slogans during a protest against a gang rape of two teenage girls in Katra village, outside the Uttar Pradesh state house, in New Delhi, India.

Geneva: Indian law enforcement and justice authorities have shirked their responsibility to fight sex attacks, a UN child rights watchdog said on Thursday, amid uproar over the horrific gang-rape and murder of two girls.

"There has been a dereliction of duty in relation to rape cases," said Benyam Mezmur, deputy chairman of the UN Committee on the Rights of the Child.

India has been struggling to overcome its reputation for sexual violence since the fatal gang-rape of a student in New Delhi in December 2012, which sparked mass protests and drew international condemnation of India's treatment of women.

Public outrage was reignited last month by the deaths of two girls, aged 14 and 15, who were gang-raped and murdered in their impoverished village in the northern state of Uttar Pradesh.

A string of other headline-making cases have piled pressure on the authorities.

The UN committee is made of up 18 independent experts who monitor the implementation of international children's rights treaties.

The panel held a hearing with Indian officials earlier this month.

In its conclusions on that session, released on Thursday, it said it was alarmed by "widespread violence, abuse, including sexual abuse, and neglect of children".

It pointed to data showing that one in three rape victims in India is a minor and that half of the abusers were known to the child or in a position of trust and responsiblity.

"We're not only interested about those cases that attract international media attention," said Mezmur, who hails from Ethiopia and is a human rights law lecturer at the University of Western Cape in South Africa.

He said they were the tip of the iceberg.

"We're also very much concerned about those that do not benefit from the media attention, do not get to be reported to the authorities, do not command a protest in the streets of the cities or the villages where they have been committed," he said.

A rape occurs every 22 minutes in India, according to government figures.
India brought in tougher laws last year against sexual offenders after the New Delhi gang-rape.

But the legislation, which was also designed to educate and sensitise police on rape cases, has failed to stem the tide of violence.

And the UN committee noted that the 2013 law failed to criminalise sexual abuse of girls over the age of 15, provided they were married -- in contradiction with legislation passed the previous year on child protection.

Mezmur said there were major concerns about the "implementation gap" between different federal and state laws, a lack of capacity to apply the rules, and inadequate crime data.

The UN committee also criticised comments from political leaders who have played down the problem.

Promoted
Listen to the latest songs, only on JioSaavn.com
Last week, Mr Modi warned politicians against "politicising rape", saying they were "playing with the dignity of women" and should instead work together to protect women.

The UN committee also urged India to take immediate measures to prevent female infanticide and abandonment of girls, and ensure implementation of rules against sex-selective abortions.