Sushma Swaraj, who arrived in Paris yesterday on the second leg of her four-nation tour, called on French President Emmanuel Macron. 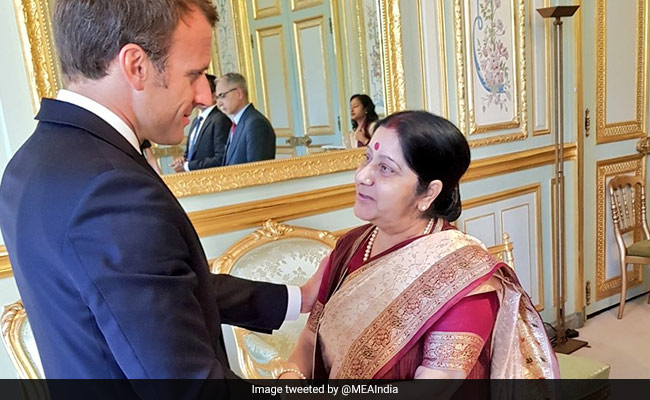 Paris: India and France are working towards shaping a strong development partnership, including in the fields of science and technology, clean energy and infrastructure, External Affairs Minister Sushma Swaraj said after she met the country's top leadership and discussed issues of mutual interest from a strategic perspective.

Ms Swaraj, who arrived in Paris yesterday on the second leg of her four-nation tour, called on French President Emmanuel Macron and discussed the follow up to the understandings reached during his visit to India in March this year.

"Our trade, capital and technology partnerships are registering impressive growth. Bilateral trade touched Euros 9.85 billion (or USD 10.95 billion) last year. But, we need to do more to reach the set target of trade in goods to 15 billion Euros by 2022," Ms Swaraj was quoted as saying by Mr Kumar.

"India and France are also working to shape a strong development partnership, including in the fields of smart urbanisation, science & technology, clean energy,  transportation, and infrastructure sectors," Ms Swaraj said.

She said the visits of Prime Minister Modi to France in April 2015 and June 2017 and French President Macron's to India, have infused new momentum and dynamism to bilateral strategic partnership, brought about increased political convergence and built deep mutual trust.

Ensure Preparedness For Next 2 Months To Fight COVID-19: Health Ministry