This was conveyed by Foreign Secretary Harsh Vardhan Shringla to the Tamil leaders in Sri Lanka during his separate interactions with them. 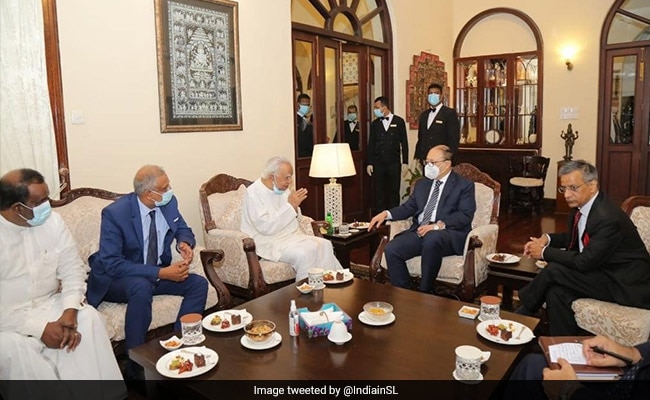 India on Monday reaffirmed its commitment to protect the rights of Sri Lanka's minority Tamil community through the full implementation of the 13th Amendment, early convening of Provincial Council elections and achieving reconciliation.

This was conveyed by Foreign Secretary Harsh Vardhan Shringla to the Tamil leaders there during his separate interactions with them.

"Foreign Secretary @harshvshringla had separate and productive meetings with delegations from TNA, TPA and CWC," the Indian High Commission said in a tweet.

"He emphasised India's commitment to protecting the rights of Tamils through full implementation of the 13th amendment, early convening of Provincial Council elections, achieving reconciliation and establishing connectivity to India," it added.

He emphasized India's commitment to protecting the rights of Tamils through full implementation of the 13th amendment, early convening of Provincial Council elections, achieving reconciliation and establishing connectivity to India. (2/2)

Mr Shringla earlier said that with the easing of the COVID-19 situation in Sri Lanka, it may be opportune for the two sides to work on connectivity initiatives like the Jaffna to Chennai flight, ferry services between Karaikal and Kankesanthurai and Dhanushkodi and Talaimanar, and the Buddhist corridor with the new international airport at Kushinagar.

India has been consistently calling upon Sri Lanka to fulfill its commitments to protect the interests of the Tamil community and preserve the island nation's character as a multi-ethnic and multi-religious society.

The 13th Amendment provides for devolution of power to the Tamil community. India has been pressing Sri Lanka to implement the 13th amendment which was brought in after the Indo-Sri Lankan agreement of 1987.

The ruling Sri Lanka People's Party's Sinhala majority hardliners have been advocating a total abolition of the island's Provincial Council system established in 1987. There are nine provincial councils in Sri Lanka.

Earlier in January, External Affairs Minister S Jaishankar during his visit to Colombo spoke on the need to ensure aspirations of the minority Tamils are addressed within a united Sri Lanka.

He had underlined India's backing for Lanka's reconciliation process and an "inclusive political outlook" that encourages ethnic harmony.

"It is in Sri Lanka's own interest that the expectations of the Tamil people for equality, justice, peace and dignity within a united Sri Lanka are fulfilled. That applies equally to the commitments made by the Sri Lankan government on meaningful devolution, including the 13th Amendment to the Constitution," he had said.