No De-Escalation Before Full Disengagement: Army Chief On Ladakh Standoff 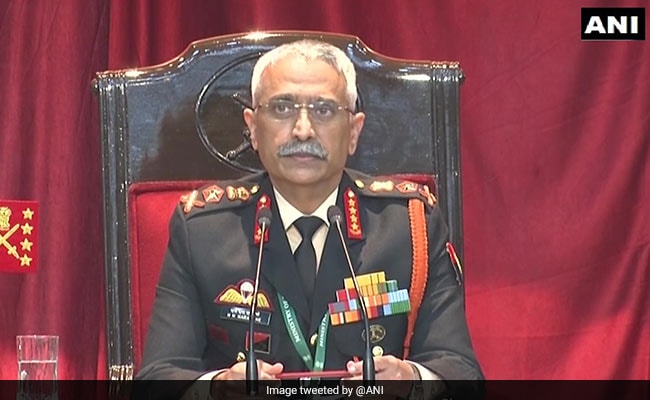 The situation along the northern border is under control, General MM Naravane said (File)

In a clear and unambiguous message to China, Army Chief General MM Naravane on Friday said there can be no de-escalation without complete disengagement at all friction points in eastern Ladakh and that the Indian Army is prepared for all contingencies in the region.

In an exclusive interview to news agency PTI, General Naravane said India is dealing with China in a "firm" and "non-escalatory" manner to ensure the sanctity of its claims in eastern Ladakh, and that it was even open to initiating confidence-building measures.

It has been more than a year since the military standoff between the two sides erupted in eastern Ladakh on May 5 during which there were fatalities on both sides for the first time in 45 years. They have made limited progress in achieving disengagement at the Pangong lake area while negotiations for similar steps at other points remained deadlocked.

General Naravane asserted that the Indian Army is currently holding onto all important areas in the high-altitude region and it has adequate personnel in the form of "reserves" to react to any contingencies.

"We are very clear that no de-escalation can take place before disengagement at all friction points. India and China have signed a number of border agreements which have been unilaterally breached by the People's Liberation Army (PLA)," General Naravane said.

"Though we want peace and tranquillity at the Line of Actual Control (LAC) and are open to initiating confidence-building measures, we remain prepared for all contingencies."

He also said the situation along the northern border is under control and that the coming rounds of military talks with China will focus on restoring the status quo ante of April 2020.

"Indian Army is very clear that no loss of territory or unilateral change in status quo will be permitted. We are dealing with the Chinese in a firm and non-escalatory way, ensuring the sanctity of our claims in eastern Ladakh," he said.

To a question on when a resolution of the standoff can be expected in areas like Hot Springs, Gogra and Depsang, the Army Chief said it was difficult to predict the timeline.

"The Indian Army maintains all protocols and agreements between the two countries while the PLA escalated the situation by utilisation of unorthodox weapons and amassing a large number of troops," he said, in a reference to the Galwan Valley clashes last June.

"Troops are currently holding all important areas and we have adequate troops in the form of "reserves" to react to any contingencies," the Army Chief added.

India-China ties came under severe strain following the deadly clash at the Galwan valley following which both sides rushed in thousands of additional troops as well as battle tanks and other large weapons to the region.

"The trust levels are bound to be low when a major standoff takes place between two countries leading to casualties on both sides. However, it is always our endeavour that this trust deficit should not hinder the negotiation process," General Naravane said.

"As two professional armies, it is imperative that we resolve the situation and make progress to restore trust at the earliest," he said.

Asked about the possibility of any escalation of tension in the region, General Naravane said there has been no infringement by the Chinese side following the agreement on the disengagement in the Pangong lake area and that chances of any untoward incident are low.

He also said the strength of troops on both sides at present are more or less what it was last year and that the Indian Army was aware of what is happening in the region, adding "you cannot be complacent".

The Chief of Army Staff said the training areas of the PLA located in depth areas at a distance of around 1,000 km from the LAC are also being looked at. Each side currently has around 50,000 to 60,000 troops along the LAC in the sensitive sector.

The military standoff began at multiple friction points on May 5 last year. Both sides completed the withdrawal of troops and weapons from the North and South banks of the Pangong lake in February as part of an agreement reached following a series of military and diplomatic talks.

There was no visible forward movement in disengagement of troops at the remaining friction points as the Chinese side did not show flexibility in their approach at the last round of talks on April 9. The Chinese military is currently conducting a drill at its training areas near the Ladakh region.