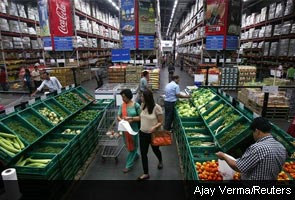 New Delhi: After years of intense debate, India's government agreed on Friday to open the country's retail sector to global behemoths like Wal-Mart and Ikea, pushing for a profound shift in India's economic and political direction.

India is still mostly a nation of small shopkeepers and farmers, and its economy is heavily controlled by the government, a legacy from decades of socialist policies. But a sharp slowdown in economic growth and a sense of impending political collapse prompted the government to finally act on long-pending proposals to loosen market restrictions in hopes of luring more foreign investment and expertise.

"The time for big-bang reforms has come," the prime minister, Manmohan Singh, said, "and if we go down, we will go down fighting."

Mr. Singh is widely credited with helping bring about India's first great bout of economic changes in 1991, when he was finance minister and India's economy was in a crisis. But his reputation ebbed in recent months as the government's economic agenda stalled and a growing chorus of critics described him as feckless, and worse.

A recent coal corruption scandal has also tainted Mr. Singh and led the country's leading opposition, the Bharatiya Janata Party, to shut down Parliament in recent weeks with calls for his resignation.

"The cabinet has taken many decisions today to bolster economic growth and make India a more attractive destination for foreign investment," Mr. Singh said in a statement. "I believe these steps will strengthen our growth process and generate employment in these difficult times."

But the plans will continue to stir controversy, and it was not clear whether the government's shaky coalition would hold together long enough to carry them out.

Balbir Punj, a spokesman for the Bharatiya Janata Party, told a TV news channel that the measures passed Friday by the governing United Progressive Alliance were "a very cheap attempt by the U.P.A. to divert attention from the 'coal-gate' scam."

"We are totally opposed to it and we are going to fight it tooth and nail," Mr. Punj said of the economic measures, despite the fact that his party had proposed some of them itself when it was in power a decade ago.

Chandrajit Banerjee, the director general of the Confederation of Indian Industry, welcomed Friday's policy changes as well as a measure announced Thursday to reduce government subsidies for diesel fuel. He said the government's policy paralysis had led to despondency among many business leaders, but Friday's announcement was "a tremendous boost not only to the sectors in question, but is a huge mood lifter."

India's retail sector is dominated by small shops, and its wholesale distribution networks are disastrously inefficient. More than a third of the fruit and vegetables grown in India rot or perish between farms and stores, increasing hunger and impoverishing farmers.

Anand Sharma, India's commerce minister, said in a news conference that foreign retailers would bring vital investments in such areas as refrigerated trucks and modern sorting and processing facilities. The measures require foreign retailers entering the Indian market to put at least half of their investments during the first three years of operations into processing and other back-end facilities. In another compromise aimed at deflecting domestic opposition, only cities with populations of at least one million - there are 53, census records show - will be eligible for the stores.

Given the continuing constraints the new policy places on major retailers, it was still unclear how aggressively they would seek to enter India. The policy also allows state governments to block major retailers from setting up operations, and includes a requirement that retailers buy 30 percent of their supplies in India, which could prove difficult for some.

Still, the plan was widely welcomed by most economists and big-business executives, who have been urging the government to open the economy further to competition and consolidation. "These measures are clearly positive and if not rolled back bode well for all asset classes," Rohini Malkani, an economist at Citibank India, wrote in an analysis.

Mr. Singh is taking a big political risk with the economic proposals, which could end up breaking up his governing coalition. Mamata Banerjee, the chief minister of West Bengal and a crucial partner in the coalition, has announced that she is opposed to allowing major foreign retailers to operate in India.

"We are totally against these decisions," Kunal Ghosh, a spokesman for Ms. Banerjee, said Friday. "We were not consulted by the government."

Asked whether Ms. Banerjee would leave the coalition and effectively topple the government as a result of Friday's measures, Mr. Ghosh refused to answer. "If we withdraw support, the main problem will not be solved," he said.

Ms. Banerjee will hold a party conference in Calcutta on Tuesday to consider her next course.

The measures announced Friday would also allow foreigners to own up to 49 percent of the value of domestic airlines, a policy that is considered a sop to Kingfisher Airlines, which has been struggling financially.

"Denial of access to foreign capital could result in the collapse of many of our domestic airlines, creating a systemic risk for financial institutions and a vital gap in the country's infrastructure," a government statement said.