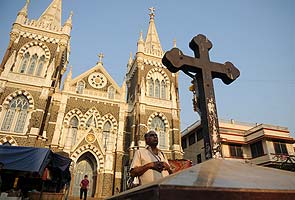 Panaji: India's Catholics may account for less than two percent of the country's population but they will be Asia's most powerful voice in the election to choose a new pope.

Five of the nine Asian cardinals who have the right to vote at the upcoming papal enclave hail from India, an overwhelmingly Hindu nation where Catholics are also outnumbered by Muslims and Sikhs.

Only Italy, the United States and Germany will be represented by more cardinal electors when they meet in Vatican City.

But with around 17 million practicing Catholics, India is home to the Church's second largest community in Asia after the Philippines.

Like elsewhere on the continent, Indian Catholics would love to see an Asian take over from Benedict XVI, with Luis Antonio Tagle, the archbishop of Manila, the name most often mentioned by Vatican observers.

Oswald Gracias, the archbishop of Mumbai who is one of the five Indian cardinals, has expressed doubt that an Asian will be elected pope for the first time and insists that a candidate's birthplace should not be a major factor.

"For me it's not important what continent he comes from," he told the Catholic News Service.

Telesphore Toppo, the archbishop of Patna and another of the five Indian cardinal electors, has also said that nationality should not be a factor.

Thousands of miles away from the Vatican, the election is being closely followed in the sun-blessed coastal state of Goa, a place better known in the West for its hedonistic beach parties.

One in four of the state's 1.5 million population is Catholic - a legacy of centuries under Portuguese rule - and many would love to see an Asian become the church's leader.

But they also stress that his beliefs on keynote issues are the most important consideration.

"It would be an honour for the continent," Peter Cabral, a 56-year-old baker told AFP outside the Church of Our Lady of the Immaculate Conception in Panaji, the state capital.

Cabral hopes that regardless of where the pope comes from, he will have a truly global outlook.

"He should not sit only in the Vatican while heading the flock. He should personally see the people before deciding the agenda," he said.

Although an Asian pope would be a radical departure from tradition, many Catholics expressed the desire that a change at the top should not lead to major changes on social issues.

Banker Richard D'Mello, 37, said the new pope should be "a bit liberal" but stick to "traditional religious ethos".

"The Church is against gay marriage and contraception, so let it be that way. Liberal values do not mean he should challenge everything," he told AFP.

On the same issues, social worker Maria Viency Cardozo, also in her late 30s, agreed that there should be no progression.

"The new pope should not change the policy," she said. "The resolutions were taken by the Catholic Church after much deliberation."

A reader survey by the Union of Catholic Asian News found that sex abuse by the clergy and its handling by Church authorities is the top priority for the next pope, who will have to deal with a string of scandals.

Other important issues raised included unifying the Church and offering a more pastoral response to divorcees.

Jerry Fernandes, who runs a small kiosk on an island off Goa, said the new pope "has a challenge to be different" and adapt the Church to changes in the modern world.

Promoted
Listen to the latest songs, only on JioSaavn.com
"More than the issue of humanity and strengthening religion, he also needs to focus on crucial aspects like the environment," he said.

The election, which should be decided by March 31, was triggered when Benedict became only the second pontiff to step down by choice in the Church's 2,000-year history and the first to do so since the Middle Ages.