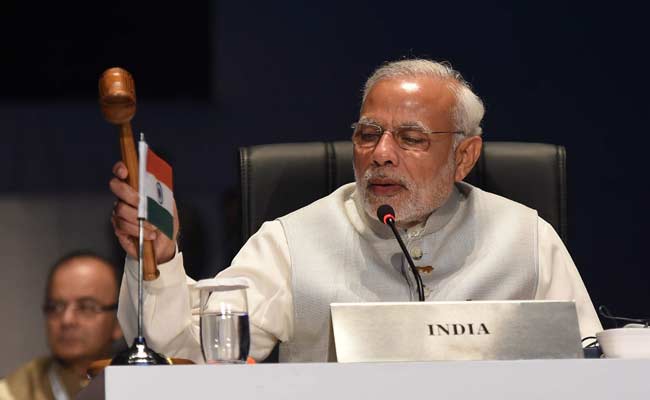 PM Modi at the closing ceremony of the India-Africa Summit. (PTI photo)

New Delhi: India today announced a concessional credit of USD 10 billion to Africa in the next five years and a grant assistance of USD 600 million as Prime Minister Narendra Modi strongly asked the continent to speak in "one voice" with it in pushing for UN Security Council reform and combating climate change and threat of terrorism.

In his address at the 3rd India Africa Forum Summit, PM Modi assured 41 Heads of State and Government and hundreds of senior officials from 54 African countries that India will extend all possible assistance to them including in areas of defence, security, trade and infrastructure development.

In the concluding session, the summit adopted 'Delhi Declaration' and a India Africa Framework for Strategic Cooperation to chart a new course of engagement in diverse areas with PM Modi describing it as a historic day for both sides.

"Today, it is not just a meeting of India and Africa. Today, the dreams of one-third of humanity have come together under one roof. Today, the heart beat of 1.25 billion Indians and 1.25 billion Africans are in rhythm," PM Modi said.

On India's development works in Africa, he said it will strengthen the monitoring system to ensure effective implementation of the projects noting that "We are conscious of the shadow that falls between an idea and action, between intention and implementation."

He said a joint monitoring mechanism with African Union will be set up.

"To add strength to our partnership, India will offer concessional credit of USD 10 billion over the next five years. This will be in addition to our ongoing credit programme," PM Modi said, adding India will also offer a grant assistance of USD 600 million which includes an India-Africa Development Fund of USD 100 million and a Health Fund of USD 10 million.

Identifying reform of UN Security Council as a major issue, PM Modi cautioned that the global body ran the risk of becoming irrelevant unless it adjusted to the changing world.

The Delhi Declaration said Africa took note of India's position and its aspirations to become a permanent member with full rights in an expanded UN Security Council, calling for a decisive push in achieving "concrete outcomes" in reforming the top decision making body.

When asked why the African leaders did not clearly spell out their support for India's candidature for permanent membership of UNSC, Secretary West in Ministry of External Affairs Navtej Sarna said the summit was not about reform of the global body and that it was one of the subjects discussed in it.

The Prime Minister specifically called for stronger ties between India and Africa in the strategic areas of counter-terrorism and climate change.

"Closer defence and security cooperation, will be a key pillar of India-Africa partnership. We will intensify our cooperation against terrorism and rally the world to build a common cause against it," he said.