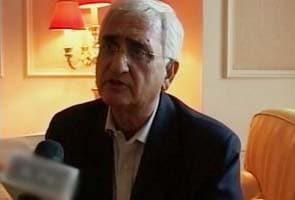 The aid was announced by Indian External Affairs Minister Salman Khurshid who is visiting Myanmar on his first bilateral trip abroad.

Khurshid, who arrived in Nay Pi Taw earlier in the day, called on President Thein Sein.

India is also to set up a consulate at Sittwe, capital of Rakhine state, situated on the western coast.

India is involved in developing the $120-million Sittwe deep water port, which is set to become functional by June 2013. The port will allow cargo vessels from India's landlocked Mizoram state to navigate the Kaladan river and connect them to Myanmar and southeast Asia.

Rakhine witnessed clashes between the Rakhine and Rohingya communities, leaving around 35,000 people displaced last month. The total number of displaced since June stands at 110,000

During the visit, he would also meet his Myanmar counterpart U. Wunna Maung Lwin.

Khurshid is to inaugurate the International Conference on Buddhist Cultural Heritage that is being jointly organised by India and Myanmar in Yangon on Saturday.

The minister is also scheduled to unveil the 15-foot high replica of the Sarnath Buddha statue in the precincts of the Shwedagon Pagoda in Yangon. The Buddha statue was gifted by Prime Minister Manmohan Singh during his visit to Myanmar in May this year.

Promoted
Listen to the latest songs, only on JioSaavn.com
Khurshid's December 14-16 visit is aimed to "provide an opportunity to review the entire gamut of the bilateral relationship and build further upon the momentum in bilateral relations", said an external affairs ministry statement on Thursday.

"India and Myanmar enjoy the closest ties of friendship and cooperation based upon the commonalities of history, culture, religion, ethnicity and spirituality. The exchange of high level visits over the past year has further strengthened these multifaceted ties," the Indian external affairs ministry said.