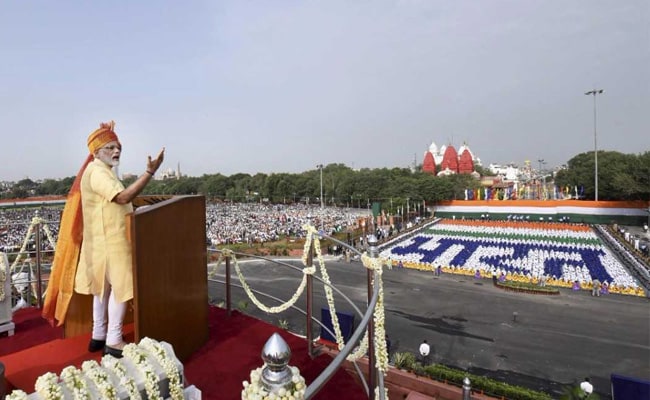 For Independence Day speech, PM Modi had asked people to send the ideas on the Narendra Modi App.

Viewers can watch the LIVE webcast of the Independence Day speech by PM Modi on ndtv.com by following this link: https://www.ndtv.com/video/live/channel/ndtv24x7

Like every year, this year too Prime Minister Modi had asked people to send the ideas on the Narendra Modi App for his Independence Day speech. The Prime Minister has reportedly received over 30,000 suggestions for his August 15 speech.

What are your thoughts and ideas for my 15th August speech?

Share them with me on a specially created forum on the Narendra Modi App.

I look forward to receiving your fruitful inputs in the coming days.

On the eve of the Independence Day, President Ram Nath Kovind will address the nation which will be broadcasted from 7 pm on the entire national network of the All India Radio (AIR) and telecast over all the channels of Doordarshan in Hindi followed by the English version. The broadcast of the address in Hindi and English will be followed by broadcast in regional channels of Doordarshan, a statement issued by the Rashtrapati Bhavan said.

The information was also tweeted on Doordashan News Twitter handle:

President #RamNathKovind will address the nation today on the eve of the 72nd #IndependenceDay; The address will be broadcast from 7 PM in Hindi followed by the English version pic.twitter.com/wssdLWwsS8

The speech can also be viewed on NDTV's LIVE webcast on the link below:  https://www.ndtv.com/video/live/channel/ndtv24x7

It will be President Ram Nath Kovind's second Independence Day speech as the President of the country.