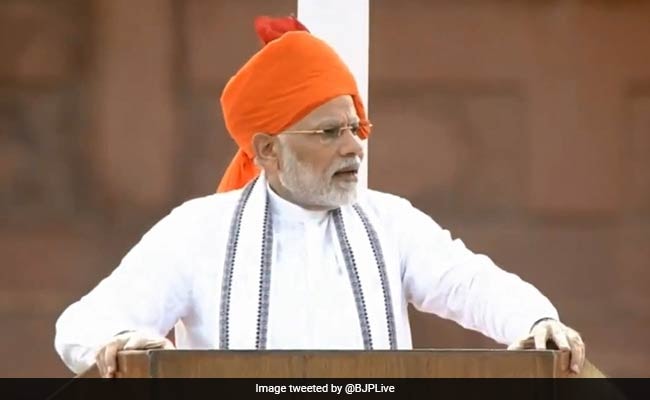 Prime Minister Narendra Modi today said his government had the courage to take "bold decisions", like MSP for farmers and GST, putting India on a new trajectory unlike the previous regime which he alleged suffered from indecisiveness.

He said India's status in the world had increased manifold since 2014 when a BJP-led NDA came to power "because we have acumen to take bold decisions".

Institutions and economic scientists across the world used to refer India as a "risky economy, but today the same institutions and the same individuals are saying with confidence that reforms have given India a new momentum and strong fundamentals", PM Modi said in his address to the nation from the Red Fort on the 72nd Independence Day.

This is the Prime Minister's fifth and the last Independence Day speech before the general elections next year. He said the country was earlier counted among the fragile five economies in the world. "But today India is considered a multi-trillion dollar destination" for investment. "They say the sleeping elephant has woken up and started walking. For the next three decades, India is going to guide and speed up the world economy."

Targeting the Congress-led UPA but without naming it, PM Modi said if his government had worked with the speed followed in 2013, it would have taken a century in making India open defecation free or electrifying every part or even providing LPG connection to every woman.

"The demand for higher MSP (minimum support price for farmers) was pending for years. From farmers to political parties to agriculture experts, everybody was asking about it but nothing happened. The decision was taken by our government to provide the MSP of 1.5 times of production cost."

He said the armed forces veterans were demanding one rank, one pension but no one listened to them before the Bharatiya Janata Party came to power.

Talking about the Goods and Services Tax (GST), he said it had given new confidence to small and big traders who "wholeheartedly embraced" the new tax regime despite facing "initial problems". "It is the same land, same sky, sea, government offices and the country. But in the last four years, India has moved with a new zeal and therefore today India is constructing twice the highways and producing record crops."

Promoted
Listen to the latest songs, only on JioSaavn.com
Comments
Independence Day speechMSPGST