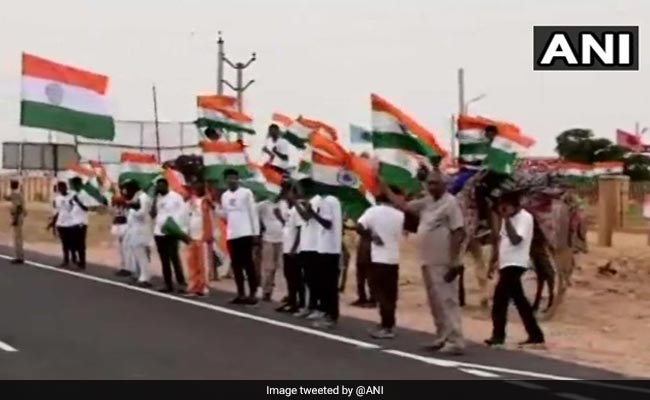 The event, 'Shahdat ko Salam', was organised to instill a sense of patriotism.

Nearly 5 lakh people joined hands to form a 700 km-long human chain along the India-Pakistan border in Rajasthan to honour martyrs and boost morale of soldiers on the eve of Independence Day.

The event, 'Shahdat ko Salam', was organised to instill a sense of patriotism.

Chief Minister Vasundhara Raje took aerial survey of the  event and paid tributes to the martyrs.

People, including women, schoolchildren, BSF and Army jawans and administrative officials, participated in large numbers to form the human chain.

Mr Kasera said that the chief minister honoured 21 people  including soldiers and their family members.

On the Independence Day eve, the chief minister congratulated people of the state, saying that India is shining at the global platform because of "blood and sweat of martyred soldiers", freedom fighters and their devotion towards the country.

She said that it would be a real tribute to the martyrs if we all contribute to the progress of our country by developing an atmosphere of social harmony and brotherhood.

Mr Raje said the true meaning of freedom is when the last person in queue lives a "good life with due respect".

The government is committed to protecting the rights of every person, she said.

Mr Raje said that due to the public welfare schemes and positive decisions of the state government, Rajasthan is all set to join the country's leading states in all sectors, including in education, health, employment, agriculture and industry.