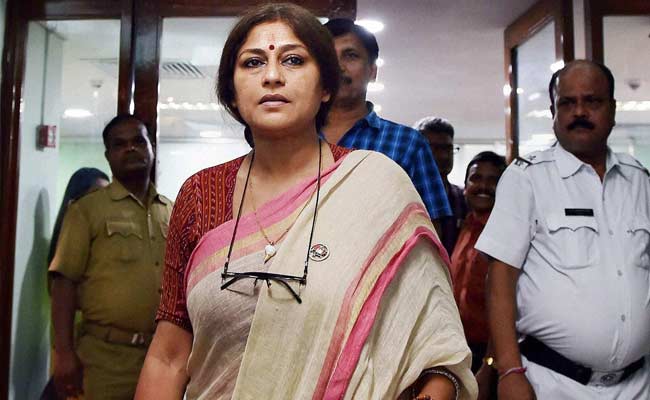 Roopa Ganguly had lost the first election she fought as a BJP candidate. (File Photo)

New Delhi: Actor and BJP leader Roopa Ganguly has been nominated to the Rajya Sabha or Upper House of Parliament to take a seat vacated by cricketer turned politician Navjot Singh Sidhu, who resigned earlier this year.

Four months ago, Ms Ganguly had lost the first election she fought as a BJP candidate in the West Bengal assembly polls to another cricketer, local star Laxmi Ratan Shukla, who was fielded by Mamata Banerjee's Trinamool Congress.

Known most for her fiery portrayal of the mythological Draupadi in a television serial Mahabharat that ran for almost two years, Ms Ganguly's short innings in politics - she joined the BJP last year - has been rather dramatic.

On voting day in Bengal in April, Roopa Ganguly was caught on camera in Howrah Uttar, the constituency she was contesting, slapping a woman supporter of the Trinamool Congress.

The next month she was attacked near Kolkata, allegedly by workers of the Trinamool Congress, and suffered head injuries.

In Parliament, Ms Ganguly joins actors like Rekha and Suresh Gopi from Kerala who was nominated along with Mr Sidhu in April this year. Navjot Sidhu had resigned from the Rajya Sabha in July in a dramatic move, expressing disenchantment with his party, the BJP, which had denied him an opportunity to contest the Lok Sabha elections in 2014 from Punjab's Amritsar, a constituency he represented for two terms.

Promoted
Listen to the latest songs, only on JioSaavn.com
Mr Sidhu formally quit the BJP last month, and has announced himself open to political tie-ups with "like-minded parties" that want to defeat the BJP and its ally, the ruling Akali Dal in the Punjab elections early next year. Long drawn negotiations with the Aam Aadmi Party came to naught, reportedly because Mr Sidhu wanted to be projected for Punjab chief minister.

Nominated members of the Rajya Sabha are drawn from fields such as literature, science, sports, art and social service. There are 12 nominated members in the House of Elders.