In Meghalaya Hills Where Mine Collapsed, Illegal Coal Trade Continues

Meghalaya mine incident: It raises serious questions about unchecked coal mining in Meghalaya even after the National Green Tribunal banned it in 2014

Meghalaya mine: The Navy, NDRF and Odisha Fire Service are involved in rescue operations

Some villagers at East Jaintia Hills in Meghalaya have been visiting a rat-hole mine every day for over three weeks after 15 men disappeared when water flooded the illegal mine in the district on December 13. Three men among the group of migrant workers trapped in the mine's dark labyrinth are from their village.

The villagers say they are worried about the men as well as the attention this incident has drawn. For thousands of villagers in these parts, illegal rat-hole mining that involves digging into the side of hills and then burrowing tunnels to reach a coal seam is the only source of income.

"We have been mining coal for three decades. We have only done this. This is the only source of income and with no options, we didn't care about environment laws or death," said a middle-aged miner who came to see the progress of the rescue operation at the mine. "Many such incidents have happened in the past. Miners got buried and became skeletons," he told NDTV, asking not to be named.

The "mining mafia" is quite strong in East Jaintia Hills, he said.

On day 19, a joint search and rescue operation involving the Navy, the National Disaster Response Force (NDRF), Coal India Ltd and the Odisha Fire Service is running against time in looking for survivors, amid concerns that foul smell inside the mine reported by NDRF divers last week could be of decomposed bodies. 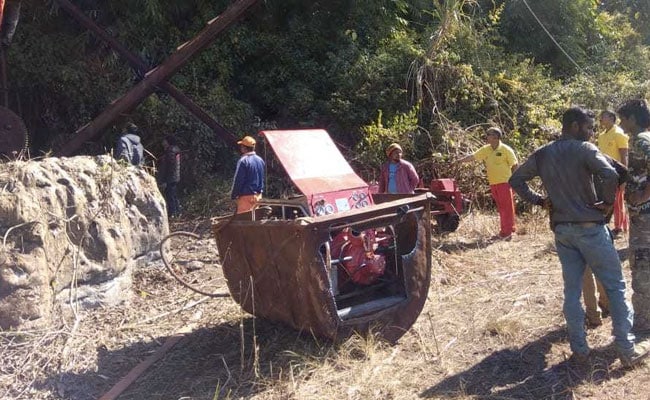 The NGT banned coal mining in Meghalaya in 2014

The incident also raises serious questions about unchecked coal mining in Meghalaya right under the government's nose even after the National Green Tribunal banned it in 2014, environment activists and scientists say.

Freshly cut blocks of coal being carried on the back of open trucks are often seen running on the state's highways.

NDTV found that some freshly cut coal stocks were being loaded onto trucks from a new rat-hole mine in the same district where the rescue operations are going on. Across East Jaintia Hills, cranes and freshly mined coal left behind by miners are a common sight. The area is dotted with palatial bungalows of local coal barons.

Activists say the powerful coal mafia is taking advantage of a concession the NGT made of allowing old coal already extracted before 2014 to be transported.

"In 2014, the coal lobby and the state government appealed to the NGT that they should be allowed to transport 600 tonnes of already extracted coal. These are freshly cut coal," said Hasina Kharbhih, an environment activist from state capital Shillong whose non-profit Impulse NGO Network petitioned the NGT along with the the Dimasa Students Union Dima Hasao disrtrict committee against rat-hole mining.

Meghalaya has an estimated 5,000 illegal rat-hole mines, mostly in East Jaintia hills. After coal mining was banned in 2014, there was a slowdown in economic activities by 70 per cent.

With few migrant labourers left in the area, traders say their businesses have been hit as well. "What would migrants do? They have to live, so they go for illegal mining, get some money," said Manoj Kumar Mishra, a Bihar resident who has been selling cloth at Khleriat, the headquarters of East Jaintia Hills, since 1995. He said coal mining was rampant between 2002 and 2014.

The Meghalaya government has admitted it failed to check illegal coal mining despite the NGT's ban.

"We admit illegal mining was going on and it's not a correct thing and appropriate action with be taken in right time," Meghalaya Chief Minister Conrad Sangma told NDTV on December 14, a day after the rat-hole mine was flooded and the miners disappeared.