The teacher has been arrested under IPC and POCSO Act provisions, police said. Case has been lodged in connection with the mob assault too. . 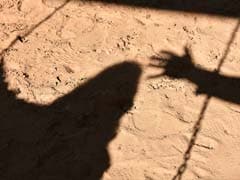 The teacher is accused of stalking the Class VIII student, police said. (Representational)

A mob beat up a private school teacher, tonsured his head, blackened his face and then paraded him at a village in Indore, Madhya Pradesh, for allegedly stalking and harassing a Class VIII student, police said today.

A video of the incident, which took place on Saturday, went viral after which the teacher was arrested under provisions of IPC and Protection of Children from Sexual Offences (POCSO) Act, in-charge of the local police station said.

"The teacher is accused of stalking the girl, who studies in the same school where he teaches, and he had recently sent her a love letter. The accused also threatened the 15-year-old girl that her family would face the consequences if she rejected his advances," the police officer said.

The officer said a case has been filed in connection with the assault of the teacher and those involved are being identified.