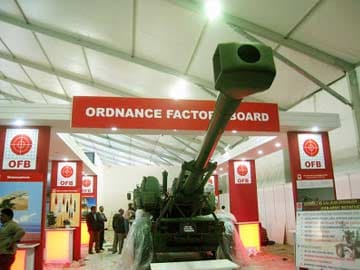 New Delhi: The Indian Army will soon add the 155-mm artillery gun 'Dhanush' to its firepower - the first to join its arsenal in nearly three decades - if it clears its final tests at Pokhran in the deserts of Rajasthan.

The gun, a homegrown version of the Swedish Bofors gun, will go through a set of summer trials at the Pokhran firing ranges from Friday, highly placed sources have told NDTV.

The 45-calibre gun built by the Ordnance Factory Board, a defence public sector unit, has gone through winter trials in the high altitudes of Sikkim last year.

The towed artillery gun is based on the design and manufacturing technology provided by Bofors in the late 1980s. If it passes the Pokhran trials, its makers will get the final clearance to manufacture the desi but improved version of the original 39-calibre Bofors gun and fill a critical gap in India's arsenal.

The "Dhanush", with its electronic sighting and laying system for aiming at the target, is said to be a major improvement over the Bofors gun's manual system. More importantly, it is likely to be priced at Rs. 14 crore a piece, less than half the price of a similar gun made abroad.

The Bofors gun has a maximum effective range of 27 km, but sources say the 'Dhanush' can fire a salvo up to 38 km in the plains.

For more than 15 years, the army's plan to modernize its weapons has been mired in delays and allegations of corruption in tendering. At least two foreign manufacturers have been blacklisted.

Promoted
Listen to the latest songs, only on JioSaavn.com
The army needs over 1,500 towed artillery guns at an estimated cost of over Rs. 10,000 crore, but not a single gun has been inducted since the Bofors gun.

The army has ordered 116 guns from the government's ordnance factory and could increase the order to 416 pieces of artillery. If the trials go off smoothly, the factory plans to double its manufacturing capacity from the current 18 guns a year.