In a First, US President Barack Obama May Not Travel in the 'Beast' for Republic Day Parade 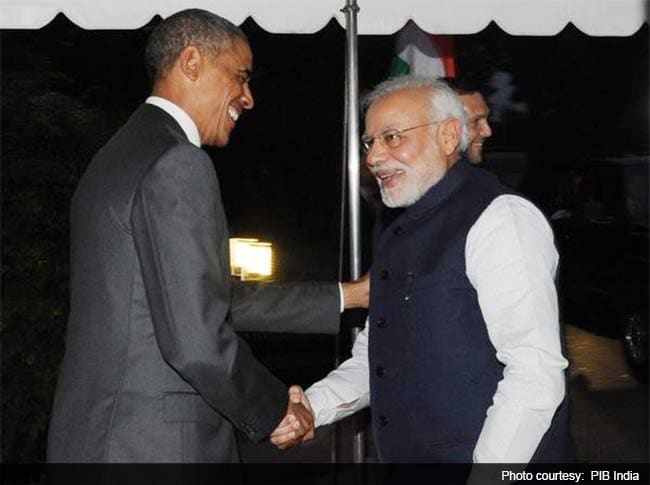 New Delhi: A seven-layer security ring is planned around the VVIP enclosure on Rajpath from where US President Barack Obama, President Pranab Mukherjee and Prime Minister Narendra  Modi will watch the Republic Day parade next Monday.

The airspace over the area will be monitored by a radar that is being specially set up, as unprecedented ground-to-air security is put in place to turn the national capital into an fortress during the visit of President Obama, who will be the first American President to be Chief Guest at the Republic Day celebrations on January 26.

Because President Obama will be on an open air platform at Rajpath for more than two hours when he witnesses the parade, there is the  possibility that the VVIP enclosure will be put behind a bullet-proof shield, sources have said.

For now, the US president is expected to follow protocol and arrive with President Mukherjee at Rajapth on the morning of Monday next. If he does that Mr Obama will possibly be the first US President not to travel in his own highly-secured bullet-proof limousine also called the 'Beast'.

A multi-agency control room will monitor surveillance operations in every area of Delhi which has been put on the highest alert because of the visit of the US President. President Obama will arrive next  Sunday, January 25, with his wife Michelle  on a three-day visit.

The threat perception is the highest for the event, but there is no specific intelligence input about a possible terror strike, officials involved in the security preparations said on Sunday while giving a broad overview of the security drill.

American Secret Service personnel, who have landed in the capital and Agra, have already conducted a preliminary survey of the routes to be taken by the US President and Rajpath where Mr Obama will be seated along with President Pranab Mukherjee, Prime Minister Narendra Modi and a host of other VVIPs to watch the annual parade.

The elite Special Protection Group and Secret Services personnel will form a part of the "close proximity ring" in the seven tiered protection planned around the VVIP enclosure, official sources said.

Central Security agencies have brought in their Concealed Anti-Terrorists (CAT) squads to the national capital and they will be part of teams that carry out surprise checks at hotels, guest houses and vulnerable localities.

The ITC Maurya hotel, where the US President will be staying, has been taken over by Secret Services personnel and a multi-frequency control room manned by US officials has been set up.

American security personnel will also be part of the teams manning the control rooms set up to watch footage of nearly 15,000 CCTVs installed in the capital and part of every rehearsal drill.

A power-point presentation of the Republic Day was given to the US officials about the events of the day including the cultural programme that will be performed by various artists before the VVIPs at Rajpath.

Besides the 80,000-member strong Delhi Police, an additional 20,000 paramilitary personnel and armed police forces from neighbouring states including Haryana, Rajasthan and from the India Reserve Battalions have been pressed into service to ensure fool-proof security in the capital especially around Rajpath where the main Republic day function will be held.

Anti-aircraft guns have been placed at strategic locations to thwart attempts to violate the air space over the venue, which is traditionally a no-fly zone.

Metro stations and offices around the Rajpath area will be taken over 72 hours in advance at the request of US security personnel. Snipers will take up positions at vantage points while Indian Air Force (IAF) will provide air cover to the parade area and the VVIPs on the ground.

The guest list for the 'At-Home' function hosted by the President is being pruned this time because of security considerations, the sources said.

Promoted
Listen to the latest songs, only on JioSaavn.com
Unlike in previous years, access to Rajpath has already been closed while roads criss-crossing Rajpath like Rafi Marg, Janpath and Man Singh Road will be shut for the general public a day or two before January 26.