"Had You Not Been A Woman..." Congress MLA Threatens Madhya Pradesh Officer On Camera

Madhya Pradesh Congress legislator Harsh Vijay Gehlot threatens sub-divisional magistrate Kamini Thakur. Says, "Had you been a man, I would have held you by the collar and then handed the memo to you". 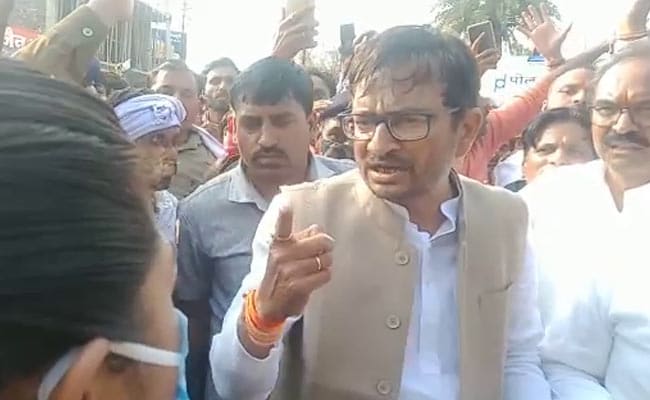 Days after a controversy over a former Madhya Pradesh minister from the Congress making regressive comments against women, a lawmaker from the party has been caught threatening a woman officer.

"You are a woman. Had you been a man I would have held you by the collar and then handed the memo to you," Mr Gehlot can be heard saying in the video.

The incident took place on Sunday in Ratlam district's Sailana town near the Madhya Pradesh-Rajasthan border after the Congress took out a tractor rally in support of farmers protesting around Delhi and against the centre's three contentious laws.

Later, a crowd led by the MLA reached the SDM's office to submit a memorandum, and when Kamini Thakur took time to step out, Mr Gehlot publicly threatened the officer.

Recently, the Madhya Pradesh state Congress unit has been making headlines for misogynistic comments by its leaders.

On Thursday, former minister Sajjan Singh Verma of the Congress had said, "When girls can reproduce at 15 years, why raise their marriageable age from 18 to 21 years?"

The remark was a reaction to Chief Minister Shivraj Singh Chouhan calling for a national debate on raising the minimum age of marriage, and set off BJP demands for an apology and his sacking from the party.

The comment came as a fortnight-long public awareness drive was launched on January 14 in the backdrop of rising crime against women in Madhya Pradesh.