If need be, will die for you, says Narendra Modi: Highlights 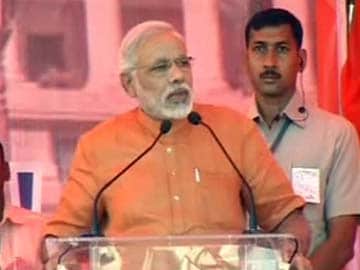 Below are the highlights:
Different parties have got opportunity to rule different states.

The BJP party also got a chance to form the government.

In this country Morarji Desai was the Prime Minister and BJP or Jan Sangh was a main partner. And there was Atalji's regime. These are the only two periods where inflation was under control.

Whenever there was a Congress or Congress-supported government, the people had to face inflation. Shouldn't a government in a democracy be answerable to the people?

Is this government answering the people? I am amazed. And even the media can't reach them.

The Congress is so arrogant that it isn't willing to answer the media. They keep making allegations, it has become fashionable.

Manmohan Singh is the PM but they want answers from Modi. They are more bothered with what I did.

I promise the people of India that when they vote for the BJP in 2014, we will present a summary of what we've done every year, not after 5 years.

The filth the Congress is spreading today, they tried doing in Gujarat for 5 years.

But the people in Gujarat saw the work done by the BJP government and were not influenced by the Congress's lies.

We have gone to the people 10 months ago, we have passed our exams with flying colours.

Those who make false promises have no right to stay in power. They had promised to control prices in 100 days - did prices come down? They went up.

Those who went back on their promises must be taught a lesson.

Winds of change are blowing across India and it will be difficult for the Congress to survive.

Congress has been carrying out a one -point agenda against me for the past 12 years.

I am standing in front of you today with god's blessings, the people's wishes and the strength of truth.

They wanted the CBI to fix Modi but now the CBI seems to have failed and I don't know what they'll do next.

It is your blessings and path of truth that I am standing in front of you. They are trying everything in the book.

India has immense skill. But this Govt in Delhi neither gave their skill nor gave them jobs

Congress President is a lady, the CM of Delhi is a lady but still women are unsafe in Delhi. How can things run like this.

Would like to wish everyone on Diwali. I am happy Mangeshkar family gave me such a big honour

This hospital's foundation was laid by Atalji and I'm here to inaugurate it. It's my privilege

Didi wrote such a touching letter to me. It was full of blessings

Raj Shakti has always been second to Samaj Shakti. This is strength of our culture. Where governments don't reach, society reaches

India can progress when we recognise the power of society

When we discuss plastic surgery, look at Ganesh - the body of a man and head of an elephant

A child from Pakistan was treated in Bangalore and it touched hearts in Pakistan. We have this capability. Our hospitals are amongst the best in the world.

Medical tourism is on the rise. There is also a need of skilled manpower in the health sector.

Human resource development is one of our biggest challenges

Mobile phones can be an indicator of your health. India has the largest number of mobiles

Ahmedabad was one of the most polluted cities in the world. We introduced CNG and we have been able to control air pollution to a great extent.

Drinking water was a problem. We brought Narmada's water into the Sabarmati river.

If a child falls into a borewell, there is a running commentary and the whole country watches on TV. But have we ever thought of infant mortality rates or mothers dying of pregnancy?

The percentage of institutional delivery is still very low

The Mangeshkar family has kept us healthy for over half a century now. If we have a healthy mind, we'll have a healthy body and through their music they've ensured we stay stress-free

No More Extension Of Interim Orders On Release Of Prisoners: Delhi High Court