"Was Deeply Jaded": Omar Abdullah On His Detention After Article 370 Move

What was done on August 5, 2019, had come as a shock to most people who were affected by the "sudden, unexpected and unconstitutional blow", Omar Abdullah said. 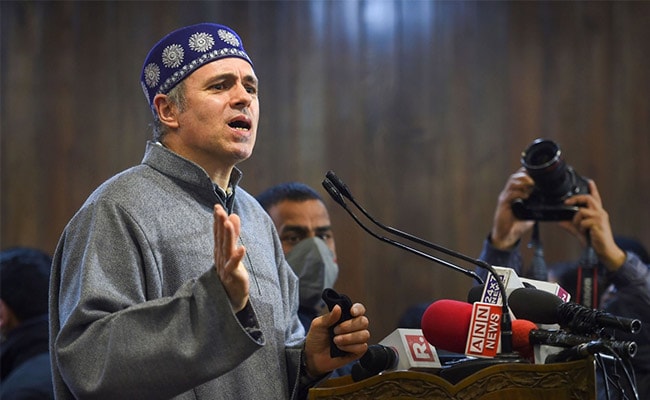 Two years after Jammu And Kashmir's special status was scrapped and his 234-day detention began, National Conference leader Omar Abdullah said after initially being "deeply jaded", he realised that as a politician he didn't have the right to "mourn" for long and could not let down those who are struggling for their basic constitutional rights.

On the eve of the second anniversary of the abrogation of Article 370, the former chief minister of the erstwhile state which has been bifurcated into Union Territories of Jammu and Kashmir, and Ladakh, said that what was done on August 5 had come as a shock to most people who were affected by the "sudden, unexpected and unconstitutional blow".

Mr Abdullah, who spent seven months in detention, recalled, "I was a deeply jaded and disappointed individual. I found it difficult to motivate myself even to indulge in basic political activities in the prevailing situation. But as the saying goes 'if you want the rainbow, you have got to put up with rain'. So here I am doing the best I can for the people."

He said the workers and leaders of the National Conference (NC) had made immense sacrifices for the people of Jammu and Kashmir.

"Hundreds of our workers and several of our leaders have fallen to the bullets of terrorists. I thought of all this when a certain light inside me kept getting dimmer during my solitary confinement. I realised I could not just walk away," he told news agency PTI.

There is no doubt in Omar Abdullah's mind that the abrogation of Article 370 was unconstitutional. The move was challenged in the Supreme Court as such on behalf of his party. "I have hope and faith in the Supreme Court which had said that they could turn the clock back if merited. I am sure that someday justice will be done to the people of Jammu, Kashmir and Ladakh," the NC vice president said.

Speaking about Prime Minister Narendra Modi's meeting with mainstream leaders of Jammu and Kashmir on June 24, Mr Abdullah said that the initiative needs to be followed up on the ground to produce meaningful results.

"The prime minister candidly spoke of reducing the "doori" (distance), both physical and mental, between Delhi and Jammu and Kashmir. We now await the start of the follow-up to that meeting," he said.

"There is so much talk of development. We would welcome that if it really happened. The administration needs to go beyond inaugurating projects for which work had begun during the time of elected governments," the NC leader said.

About the claims of substantial improvement in the law and order situation, he said, "You cannot gag the people and then claim all is well. In the last two years, people have not been allowed to even peacefully protest. The due process of law has been ignored. On the one hand, a rosy picture of the situation is being painted and on the other, the Centre tells Parliament that statehood will be restored when the situation normalises."

In any case, the people cannot any longer continue to be deprived of an elected government through free and fair elections in a full-fledged state, Omar Abdullah emphasised.

The restoration of statehood and conducting early elections have been promised at the highest levels by the Centre. "That should be the order - restoration of full, undiluted statehood, followed by Assembly elections. There is no better way to reduce, to a large extent, the trust deficit to which the prime minister obliquely referred," he said.

Omar Abdullah was categorical that he will not contest elections in the foreseeable future but made it clear, "I will continue to be with our people and serve them even if I am not in the Assembly."