'I had the honour of flying your brave son': moving letter to martyr's parents 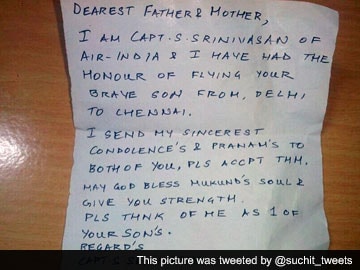 New Delhi: A pilot who flew the body of Indian army major Mukund Varadarajan - killed in an encounter with militants in Jammu and Kashmir last week - has written a moving letter to his parents.

Air India pilot Captain S Srinivasan has confirmed to NDTV that he wrote a letter to Major Varadarajan's parents, addressing them as "Dearest Father & Mother" while offering them words of comfort.

"I had the honour of flying your brave son from Delhi to Chennai," the pilot wrote. "I send my sincerest condolences and pranams to both of you, please accept them. May God bless Mukund's soul and give you strength. Please think of me as 1 of your sons."
The letter has been re-tweeted several times.

Major Varadarajan was cremated with full military honours and a 42-gun salute today.

He was killed on Friday in Shopian, 60 km from Srinagar. The army said after a tip-off, he led an assault on militants said to be hiding in a village and engaged them in a gun-battle for hours. He died of multiple injuries the next morning while being taken to hospital. The coffin carrying his body arrived in Chennai last night draped in the national flag and flowers.

The 31-year-old officer has a wife and a three-year-old daughter.
Comments
Major Mukund Varadarajan