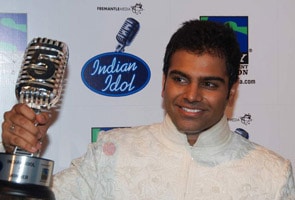 The 24-year-old singer pipped Rakesh Maini from Agra and Bhoomi Trivedi of Baroda to win the contest. Sreeram has been consistently performing well on the show and receiving compliments galore from the Who's Who of the Indian music industry.

His victory on the show has landed him Rs. 5 million cash, one-year contract with Sony BMG, a Tata Winger car, and for the first time, a chance to sing a song in a Yash Raj Films' project.

An elated Sreeram thanked all those who wished for his victory and voted for him. Sreeram's home at Bowenpally in Secunderabad wore a festive look as family members, friends and neighbours celebrated his victory.

"We knew that he is going to win. He has been performing consistently well. This is the result of effort of the entire Andhra Pradesh. Lakhs of people have sent SMSes for his victory," his sister Archana said.

For Sreeram, winning the title on India's Independence Day is a special feat.

Promoted
Listen to the latest songs, only on JioSaavn.com
Before winning the title, Sreeram said, "Independence Day has always been important. If I win, I will feel lucky that I have received my identity on a day when my country celebrates its independence. For the rest of my life I will celebrate this day as my victory day."

The finale, held at the Filmistan Studios in Mumbai, saw a mélange of celebrities like Kareena Kapoor, Kailash Kher, Richa Sharma, Alisha Chinai, Shankar Mahadevan and to top it all Bollywood's Big B, Amitabh Bachchan, who is set to host quiz show "Kaun Banega Crorepati 4". (With PTI inputs)