West Bengal Chief Minister Mamata Banerjee said that she was "hurt" that Hemant Soren came to Jhargram for political purposes and advised him to take care of his own state. 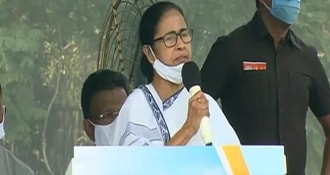 Jharkhand Chief Minister and JMM working president Hemant Soren on Thursday held a rally in Jhargram in poll-bound West Bengal's Jhargram district, demanding establishment of an autonomous council for the tribal-dominated Western part of the state.

West Bengal Chief Minister Mamata Banerjee said that she was "hurt" that Mr Soren came to Jhargram for political purposes and advised him to take care of his own state.

Sources in the Jharkhand Mukti Morcha (JMM) said that the party is keen to fight in a number of seats in the West Bengal assembly elections due in April-May this year and Thursday's well-attended public meeting is its show of strength in Jangal Mahal region.

Raking up an old demand of the tribal people of the area for setting up an autonomous council for the Western part of the state, Mr Soren said, "The JMM will fight for the interests of the Adivasi people of West Bengal."

The JMM leader also attacked the BJP-led government at the Centre claiming that it has done nothing the tribal population.

The BJP is also selling off the assets of the country, he claimed.

The BJP had bagged the Jhargram seat in the 2019 Lok Sabha polls.

"A Paschimanchal Autonomous Council should be formed under the Fifth Schedule of the Constitution We are sure that the people here will actively fight to get what is due to them," he told the meeting held at Jamda area of Jhargram.

The Fifth Schedule of the Constitution deals with the administration and control of Scheduled Areas as well as of Scheduled Tribes residing in any state other than certain states in the North Eastern region.

Following the demand for an autonomous council, the Left Front government has set up Paschimanchal Unnayan Parshad in 2000 for the development of the 74 blocks in five districts in the western part of the state. A Department of Paschimanchal Unnayan Affairs was also created in July, 2006.

The JMM has some influence in at least three constituencies in Jangal Mahal but it had never won any seat in the state.

Reacting to Mr Soren's demand, Mamata Banerjee, who is also the Trinamool Congress supremo, said, "I felt hurt. I had gone to Hemant Soren's swearing-in as chief minister (in 2019) and had supported him a lot."

Ms Banerjee said that if the JMM working president can come to West Bengal and seek votes of the tribal people, she can also go to Jharkhand where a large number of Bengalis live and ask for their votes.

"We do everything for the people living in the state," she said.