People from various parts of the Kashmir valley attended the function and vowed to protect the constitutional status of the state. 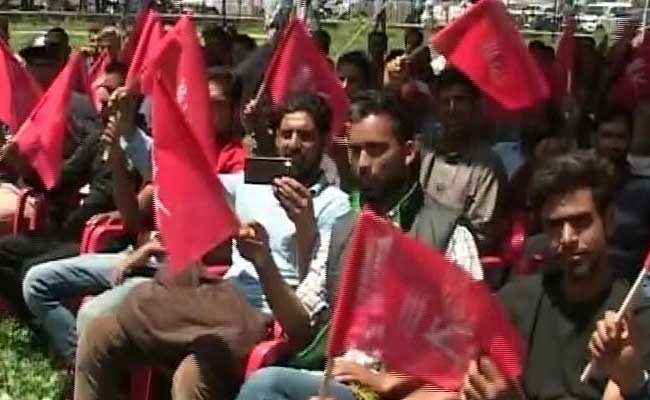 Officials say they did not give permission for the event

Srinagar: Hundreds of people waving the Jammu and Kashmir flag gathered in Srinagar on Wednesday to mark the state flag day. The event was organised by independent lawmaker Engineer Rashid in an attempt to reassert the state's unique status of having a separate flag.

Officials say they did not give permission for the event but the legislator went ahead with the program anyway. Mr Rashid exhorted the gathering to use the state anthem as ringtone on their mobile phones as he unfurled the state flag and played the song 'Lehra Aye Kashmir Ke Jhande'.

"The constituent assembly has passed resolution and made it a state flag and state song of Lehra Aye Kashmir Ke Jhande - the government should celebrate it. I'm organising it because PDP and National Conference are scared of Delhi," said Engineer Rashid after hoisting the flag.

People from various parts of the Kashmir valley attended the function and vowed to protect the constitutional status of the state.

"This flag is a unique thing we have got. No other state has its own flag. It represents that Kashmir has a unique identity compare to other states," said one Angat Singh, who among a group of Kashmiri Sikhs who attended the celebrations.

But the event is a red rag to the BJP, the party which has historically opposed separate flag and constitution to Jammu and Kashmir. Although BJP ministers fly state flag alongside national flag on their cars because it's a constitutional requirement, the party says there is no state flag day in Jammu and Kashmir and celebrating it is aimed at creating a controversy.

"They have issues left and they want to provoke certain issues just to get attention and some kind of uncertainty in the government," said Khalid Jahangir, BJP spokesman.

Making the state flag mandatory to all constitutional bodies had caused a major rift between the PDP and the BJP soon after they formed the government in 2015.
Comments
Engineer RashidJammu and Kashmir flag dayJammu and Kashmir state flag