How M Karunanidhi's Supporters Bid Adieu To Their Leader

94-year-old M Karunanidhi had been Chief Minister of Tamil Nadu 5 times, elected to the Tamil Nadu Assembly 13 times. He had never lost an election. 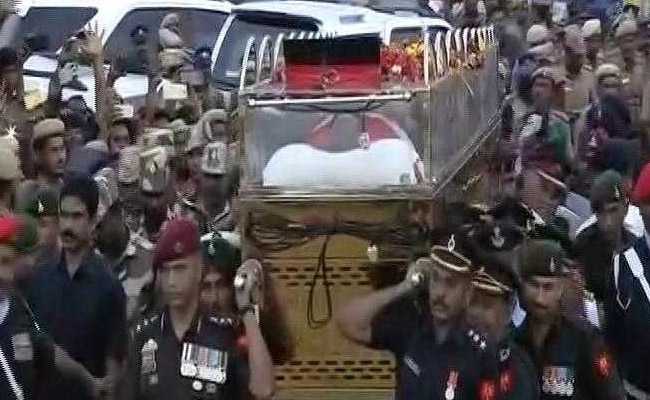 The inscription on M Karunanidhi's coffin read, "The man who never rested, is resting here"

They came in their thousands to Rajaji Hall. They came to pay tribute and say goodbye to a man who was perhaps the last political giant of Tamil Nadu - truly, to use that cliche - the end of an era.

94-year-old M Karunanidhi had been Chief Minister of Tamil Nadu 5 times, elected to the Tamil Nadu Assembly 13 times. He had never lost an election.

And with that unusual, very personal feeling that so many people in this state show for their leaders - people from Chennai and around the state came to mourn.

One man told us, "We have lost our grandfather. We are lost."

Another said,"I am in the field of IT because of him. He changed my life."

The police had kept control of the crowds from outside the hospital where he died on Tuesday evening, to the two homes his body went to before being moved to Rajaji Hall early on Wednesday morning. They kept control for several hours there as well, trying to send mourners in manageable batches. But soon, the impatience grew. People broke barricades, climbed over them and flooded the area. Squashed up against each other in the heat and humidity. The crowds only grew as the day and the heat progressed. We saw an elderly woman collapse and being revived with water. It turned out later, 2 people reportedly lost their lives and forty-seven others were injured.

Karunanidhi's son, MK Stalin, appealed for calm and asked the crowd to move towards the burial ground at Marina Beach. Over burial location, a late night and early morning legal tussle took place to allow the DMK leader to be buried alongside his leader and mentor, Annadurai.

At 4pm, the body, in its glass coffin, was mounted onto a carriage to begin the slow procession to Marina Beach. And to his final resting place. The inscription on his coffin read, "The man who never rested, is resting here."