A gate to the housing complex coming up on 200 acres in Khargone, Madhya Pradesh

An organisation with an Urdu name, a plan to set up community places by flattening rocky land, and the “fear of Muslims” — men linked to a Hindutva outfit in Madhya Pradesh bought 200 acres of land allegedly using a mix of development and communal stereotypes.

The people who sold them the land on the outskirts of Khargone town in the 2000s — most of them small farmers — have approached the police for an inquiry, as a housing colony is now taking shape in the area. They say they feel cheated as they sold the land "because we were told it'd become a Muslim area".

The group currently headed by a Ranjeet Singh Dandir, a leader of the ruling BJP, went from being “Tanzeem-e-Zarkhez” to “Professor PC Mahajan Foundation” in 2007 after the deals were done. Its officials deny any trickery.

“We are only putting the land to good use,” said Ravi Mahajan, director of the Foundation. Besides housing plots, a gaushala or shelter for stray cows is being built too, he said.

The police and the administration did not respond to requests for comment.

The BJP has distanced itself. "Our party has nothing to do with this. This issue is between the seller and the buyer and they have their own economic interest," said Rajnish Agarwal, state BJP secretary. 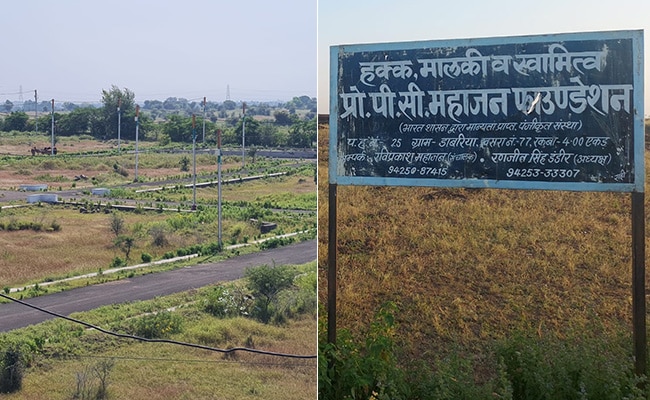 Civic development on the land; a board that declares it belongs to 'Professor PC Mahajan Foundation'.

Farmers say they were “tricked” out of their land, as they thought the agents who approached them were Muslims.

"I sold my land in 2004 when a man named Zakir came to us and said he has bought all the land around ours,” claimed Nandkishore Kushwaha, “He told us there will be a slaughterhouse here soon. ‘Sell your land to Muslims as the community is settling here anyway,' we were told.”

Others say they were told a Haj Committee would be formed, and a burial ground set up too.

Tanzeem-e-Zarkhez was formed in 2002 by a group of Hindus, who hired a Muslim man named Zakir Sheikh as manager. He told NDTV, “I thought the purpose of the organisation was to work towards a social cause. But I never forced or misled anyone to sell their land.” Some of the land was bought by another organisation formed by the same group, Prakash Smriti Sewa Sansthan.

Of the 200 acres, 150 were bought from 11 individuals or organisations. The remaining land belonged to small farmers.

One of the farmers, Deepak Kushwaha, said a man named Bablu Khan came to his father, “We sold the nine acres we had.”

A businessman named Sanjay Singhvi said, “My relatives felt that a Haj Committee would be formed, Muslims would settle here — that's why they panicked and sold the land. In the end, I sold mine as well.”

The Trust's head, BJP leader Ranjeet Dandir, told NDTV, "My name is being dragged into all this because I am well-known." He cited some cases he's facing: “I've been jailed seven times; there are murder charges on me — because all my life I've worked for Hindu society.”

On the organisation's name and the use of the land, he said, “We wanted a gaushala in Khargone. I thought we could do something good for society and for cows by building one here. I don't know what the problem is if we named it Tanzeem-e-Zarkhez.”

Mr Dandir was earlier state co-convener of the Bajrang Dal, and also served as president of a cooperative bank. 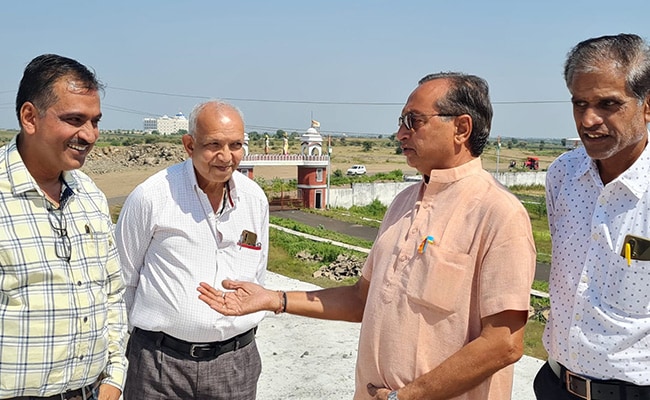 Officials of the Trust at the site of the upcoming housing complex.

The Trust is named after the father of Ravi Mahajan, who is its director. “The meaning of ‘Tanzeem-e-Zarkhez' is to make wasteland fertile. Since we felt people may not understand the meaning, we changed the name,” he said.

“The allegations are just misleading; part of propaganda,” he said, “All the work has been done according to the law. The poor have got houses. This land was barren. There was no water up to 700 feet underground.”

“I am inspired by Anna Hazare and Baba Amte. We wanted green land here, to give a message to society,” he added.

District Collector Kumar Purushottam did not respond to phone calls and WhatsApp messages.