Advit, now four years and a month old has become the youngest Asian to trek to the base camp of Mount Everest. 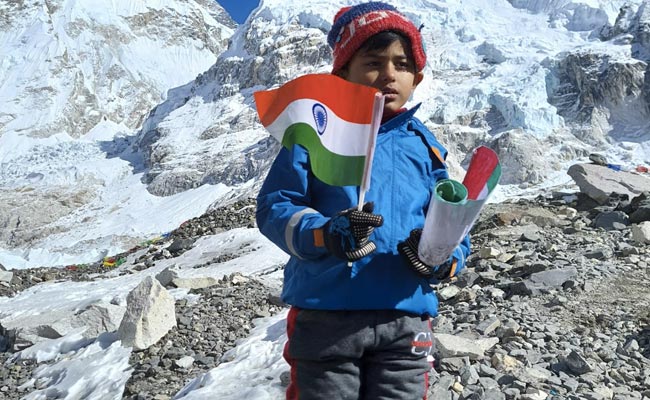 Advit becomes the youngest Asian to trek to the base camp of Mount Everest.

For the past 10 years, Advit's mother Shweta Golechha hiked and trekked. When she was pregnant with her son in 2017, she decided that Advit would become the youngest in the world to reach the Everest Base Camp. With grit, determination and passion, he did.

Advit, now four years and a month old has become the youngest Asian to trek to the base camp of Mount Everest. Accompanied by his mother and his uncle Saurabh Sukhani, Advit started the climb on October 28 and scaled a height of 5,364 meters on November 6.

"Other people who were climbing with us were amazed that child could walk so much," a proud Shweta Goleccha who trained her son for the climb said. Advit's training began at a very young age as Shweta focussed on acclimatizing him to increasing air pressure.

Shweta said that Advit did encounter some trouble towards the last leg of the trek. "But he pushed through and made it to the camp. He was very delighted to finish the trek," Shweta added.

Advit's initial training included climbing to the family's Abu Dhabi flat which is on the 15th floor.

"He is used to walking a lot since a very young age. I started training him very early. I and Advit climb the stairs to our flat rather than taking the lift," Shweta said.

Reflecting on young Advit missing on the feat of becoming the youngest person in the world to reach the base camp of the world's highest mountain, Shweta said, "I am still thrilled."

An overwhelmed Shweta said that Advit also holds the record of the youngest in the world to identify 195 countries with capitals only by looking at their flags.

"All this could not have been possible without the support of my husband Gaurav," a contented Shweta said.

Time for you to achieve those 10,000 steps walking target? Yes, it is.