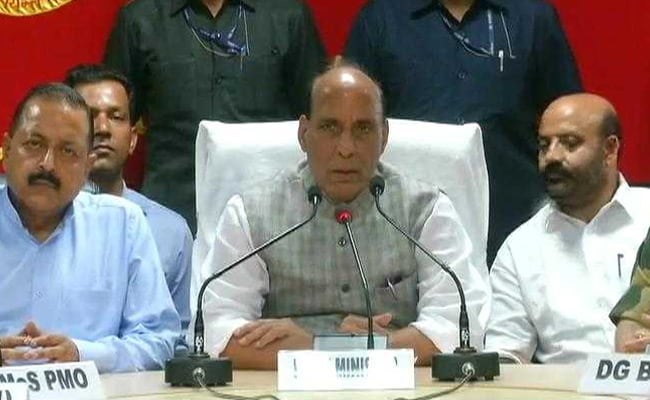 New fencing will be erected along the border after monitoring of its proper functioning: Rajnath Singh

Launching two smart fencing pilot projects along the international border with Pakistan, Union Home Minister Rajnath Singh today expressed hopes that there will be a change in the attitude of the new government in Islamabad towards India.

"I don't think that there will be any change in Pakistan's nature. I pray to God that there would be change. I hope the change will be better than before," he told reporters when asked whether he expected a change in the attitude with the formation of a new government under Imran Khan.

"Pakistan has its own nature and we cannot change it. What Pakistan can do (to change its nature), it will have to do itself. Pakistan has to understand how to behave with neighbours," he said.

He said India has initiated maximum times to maintain relations with Pakistan as a neighbour. "Our Prime Minister Narendra Modi went to Pakistan by breaking protocol only to maintain better relation. If Pakistan is not trying to understand despite that approach, then what can be done."

Launching two pilot CIBMS projects, each covering a 5.5 km stretch along the International Border in Jammu, a first-of-a-kind high-tech surveillance system, Mr Singh said the new fencing will be erected in vulnerable areas along the 2,026 km border after monitoring of its proper functioning.

The technology will help in minimising the casualties of soldiers guarding border as well as help them to de-stress due to long hours in border duties, he further added.

"It will also help in reducing the dependency on physical patrolling," Mr Singh said adding technology will create an invisible electronic barrier on land, water and even in air and underground, helping the BSF to detect and foil infiltration bids in the most difficult terrains.

"When I visited Israel, I saw this system there and immediately after that we started work on this project. Based on the feedback, the system will be foolproof. I have launched two such pilot projects here. We will launch a similar 60 km long pilot project in Assam," he said.

Mr Singh maintained that the nation has faced several challenges. "Whether it is the Naxal violence or terrorism in J&K, our security forces are dealing with this effectively. The Army, CRPF and state police are working here in absolute coordination."

Addressing the issue on the boycott of municipal and Panchayat polls by the National Conference and the People's Democratic Party, he said: "I appeal to these parties to take part in these elections because this is the only way to establish direct contact with the people."