Navy's warship Viraat: It's unclear if the damage is too extensive for the ship to now be moved. The cost of restoring the part of the ship which has been destroyed may prove to be unviable 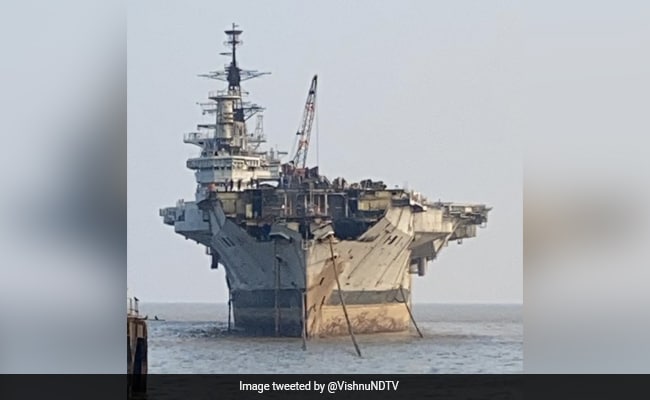 The decommissioned carrier Viraat was Indian Navy's flagship for decades.

New images accessed by NDTV indicate that the Viraat, the decommissioned Indian Navy carrier, has already been partially dismantled despite plans to convert her into a maritime museum.

The image from Alang in Gujarat likely puts an end to an ambitious proposal where Envitech, a maritime consultancy firm, hoped to buy the ship from the Shree Ram ship breakers in Alang for approximately Rs 110 crore.

In the end, the shipbreakers went ahead and dismantled a part of its ship - the ski-jump from which Sea Harrier jump jets used to leap into the sky off the deck of the ship, which was India's flagship for decades. What is left is a gaping hole above the bow of the ship, even though the hull itself appears to be intact.

It's unclear if the damage is too extensive for the ship to now be moved. The cost of restoring the part of the ship which has been destroyed may prove to be unviable.

1. And just like that, all hope seems to fade. Despite telling us yesterday that he was still willing to sell Viraat if he got his money ''in one shot,' it appears the Alang ship-breaker has already done the damage. No NOC to allow sale of the ship clearly sealed Viraat's fate. pic.twitter.com/sdFJ023H58

Ultimately, it was the reluctance of the Defence Ministry to provide a no-objection certificate (NOC) to the shipbreakers that has likely proven to be a death-knell for Viraat. Without this, the shipbreakers refused to transfer the ship.

On Monday, Shiv Sena MP Priyanka Chaturvedi also wrote to the Defence Ministry, saying the Maharashtra government would be "happy to cooperate in restoring and preserving the historical ship".

Envitech, meanwhile, approached the Supreme Court on Monday after it became apparent the NOC would not be coming from the Defence Ministry, even though the ship had been sold to Shree Ram shipbreakers for Rs 35.8 crore.

In a series of reports, NDTV has highlighted the plight of Viraat, which has been the Navy's flagship for several decades and came to define India's maritime power.

Before being commissioned into the Indian Navy in 1986, Viraat served as HMS Hermes in the Royal Navy where she fought with distinction in the Falkland Islands war in 1982 in the south Atlantic.