The Telangana CM has been travelling across the country to meet opposition leaders and as an effort to form a united alliance against the BJP. 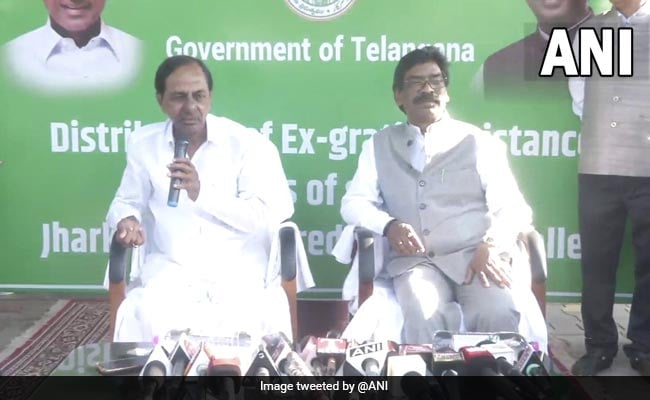 Telangana Chief Minister K Chandrasekhar Rao on Friday said that he is holding talks with like-minded parties to give "a new direction" to the nation, but asserted that it would be wrong to say now that attempts are being made by regional political outfits to forge an anti-BJP front.

Mr Rao, also the Telangana Rashtriya Samiti (TRS) president, said that political discussions are being held about steps needed for development of the nation as the country could not achieve the desired development even after 75 years after independence.

The Telangana CM, who is popularly known as KCR, has been travelling across the country to meet opposition leaders and it was being seen as an effort to form a united alliance against the BJP.

"A strong attempt is being made to try something new to give a new direction to the country as not much development has taken place in the last 75 years. Something new has to be done," Mr Rao told reporters.

However, to a query, he denied that it can be described as an attempt to forge an anti-BJP front.

"What is very clear is that there should be a sincere effort to take the country in the right direction. A beginning has been made. Discussions are on. Someone is saying this is a third front, someone is saying it's a fourth front. No front has been made till now. What shape it will take, we will get to know later," Mr Rao said.

The picture will be clear soon but before that, he said, "Don't jump to conclusions." KCR said he held political discussions with the Jharkhand Chief Minister and JMM leader Hemant Soren.

Mr Rao said he has come here to hand over cheques to the family members of two army men who were killed while fighting the Chinese force in Galwan valley in 2020 He said he also took blessings from JMM supremo Shibu Soren who had helped him during the movement for a separate Telangana state.

The Telangana CM's visit comes in the backdrop of a series of meetings he held with leaders of various organisations.