Governor Arif Mohammed Khan's statement came days after he came down hard on Kannur University Vice Chancellor Gopinath Ravindran over the issue, calling him a "criminal". 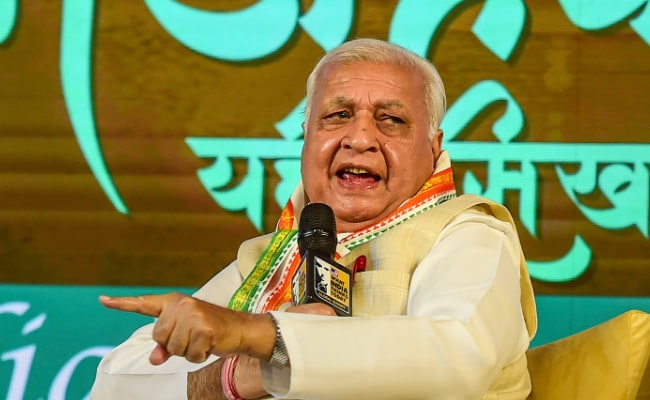 There was no immediate reaction from Irfan Habib to the Governor's allegations. (File)

Kerala Governor Arif Mohammed Khan on Tuesday targeted noted historian Irfan Habib over the incident of alleged heckling he had faced at Kannur University in 2019, calling the academician a "gunda" and alleged that he tried to "suppress" his voice "physically".

Referring to the incident that occurred in December 2019 when he went to inaugurate the Indian History Congress hosted by Kannur University where Habib was also a speaker, Khan alleged that the historian came directly at him for a physical fight.

As the Governor was about to address, most of the delegates assembled for the event rose, voicing their protest against his stand on the Citizenship Amendment Act, which was a burning issue then.

"Is it the job of an academic to indulge in a physical fight? This is the job of a gunda. A street gunda. Irfan Habib is a gunda. When I tried to reply, he wanted to suppress my voice physically," the Governor told reporters in New Delhi, reacting to a query.

Governor Khan's statement came days after he came down hard on Kannur University Vice Chancellor Gopinath Ravindran over the issue, calling him a "criminal".

The Governor alleged that the Vice Chancellor had allowed Mr Habib and others to make speeches for a long time criticising him severely, but when he stood up to answer the questions, "a physical attack attempt was made on me".

"You all saw how my ADC (aide-de-camp) was heckled. His shirt was torn. Habib came directly at me," Mr Khan said while speaking about his "criminal" remark against the Vice Chancellor.

There was no immediate reaction from Mr Habib to the Governor's allegations.

The Governor had on August 21 accused Ravindran of being part of the alleged conspiracy to attack the former when he was invited to the varsity.

"He was party to the conspiracy to hurt me physically. He is a criminal. He is sitting as VC because of political reasons. I was invited there by the VC. What was his duty when I was attacked? Was he not supposed to report it to the police? He did not do so," Khan had told reporters in the national capital.

Over 50 well-known academicians and historians on Monday had condemned Khan's "criminal" remark against Ravindran and said that such "harassment" of a distinguished academic should stop.