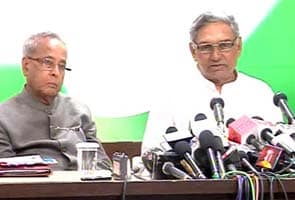 Finance Minister Pranab Mukherjee on Monday said the government has to address the high fiscal deficit, and that the country needs to return to a high growth path.

Promoted
Listen to the latest songs, only on JioSaavn.com
Here are the highlights of his speech after the Congress Working Committee meeting: