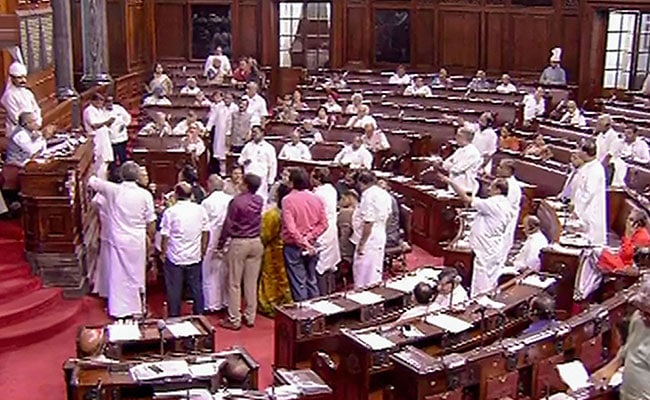 The Parliament on Thursday approved an amendment to the Right to Information or RTI Act that gave the government powers to decide salary and service terms of the statutory body head and its members, with Rajya Sabha passing it by a voice vote.

The Upper House witnessed high drama when it negated a motion for sending it to a house panel.

While the Lok Sabha had passed The Right to Information (Amendment) Bill, 2019 on Monday, the Rajya Sabha gave its approval on Thursday after opposition walkout over what it said was "intimidation" tactics by treasury benches to influence voting on the motion to send the bill to a Select Committee for greater scrutiny.

While Personnel and Training Minister Jitendra Singh rejected opposition charge of the amendment diluting the RTI provision saying it will institutionalise chief information commission and strengthen the provision, all hell broke loose when voting took place on the opposition sponsored motion.

Ministers and members of treasury benches were seen instructing the National Democratic Alliance or NDA and other like-minded party members to tick ''Noes'' on the voting slips.

But when C M Ramesh, who recently quit the Telugu Desam Party or TDP to join the BJP, was seen getting vote slips signed by members, angry members of opposition parties led by the Congress confronted him with some trying to snatch slips from his hand.

While Deputy Chairman Harivansh asked Mr Ramesh to go back to his seat, the House plunged into a turmoil as Congress members Viplove Thakur and others tried to snatch the vote slips from hands of Mr Ramesh and others opposition members rushed into the Well shouting slogans against such strong arm tactics.

Leader of the Opposition Ghulam Nabi Azad said the House has witnessed a sample of how "303 seats are won", an apparent reference to the BJP winning absolute majority in the recent Lok Sabha elections. This was strongly countered by treasury benches.

"In Parliament, ministers intimidate opposition leaders. This is our charge. Ruling party members get signatures from members who do not understand the process. You want to convert Parliament into a government department," he said.

With treasury benches vociferously protesting, Mr Azad said: "You are destroying democracy. We don't have any faith on you, so we walkout."

Almost the entire opposition walked out of the House, following which a count of the vote on the motion to send the bill to Select Committee was taken with 117 voting against and 75 in favour.

The TRS, BJD and YSR-Congress members remained in the House and are said to have voted with the ruling NDA on the motion.

With empty opposition benches, the Bill was passed by a voice vote.