The high court, however, told Arun Shourie to appear before the trial court on any day by October 15 - the next date of hearing - and furnish a personal bond of Rs 2 lakh and two sureties of Rs 1 lakh each. 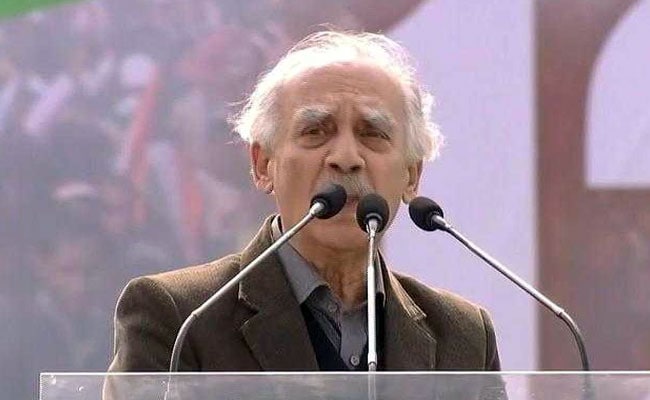 The Rajasthan High Court today stayed the arrest warrant against former Union Minister Arun Shourie and one other in a case involving the sale of a Rajasthan hotel at an alleged loss of Rs 244 crore to the exchequer.

The high court, however, told Arun Shourie to appear before the trial court on any day by October 15 - the next date of hearing - and furnish a personal bond of Rs 2 lakh and two sureties of Rs 1 lakh each.

The hotel's valuer, Kantilal Vikamsey, has been told to do the same on October 8.

The CBI today told the high court that no irregularity was committed by them, justifying the closure report filed by it earlier.

Centre's Additional Solicitor General SV Raju stated that the CBI court's order was not in conformity with the law.

A special court last week had asked the CBI to file cases against Arun Shourie and four others with regard to the sale of public sector Indian Tourism Development Corporation's Laxmi Vilas Palace Hotel to a private firm around two decades ago.

The property was sold to Bharat Hotels Ltd for Rs 7.52 crore when Arun Shourie was the minister in charge of divestment in the Atal Bihari Vajpayee-led National Democratic Alliance government at the Centre.

During a preliminary investigation by the CBI, the property was valued at Rs 252 crore, suggesting a loss of Rs 244 crore to the exchequer.

On Wednesday, Arun Shourie's counsels Pradeep Shah with Prashant Bhushan through video conferencing said there was neither the condition nor the urgency to summon the accused by arrest warrant and the CBI court erred in passing this order.

Mentioning about the other three accused who were granted bail by the court on Tuesday, Prashant Bhushan said, Though the petitioner's case was identical, but required a different order in as much as petitioner was not even named in the FIR."

He argued that the trial court erred in invocation of Section 19 of the Prevention of Corruption Act.

Arun Shourie also sought exemption from appearance in person in the CBI court for furnishing the bond and sureties, citing his age, ill-health and family conditions.

Admitting the arguments, Justice Dinesh Mehta converted the arrest warrant of Arun Shourie and Kantilal Vikamsey into a bailable warrant.

However, it asked Arun Shourie and Kantilal Vikamsey to appear in the CBI court on any day by October 15, to furnish the bonds and sureties.

With this, all five accused in the case have been granted relief from arrest as ordered by the CBI court on September 15.

Staying their arrest, the high court had termed the CBI court's decision 'not justified'.

The high court also directed that the Laxmi Vilas Palace Hotel should be transferred back to the company, a week after the lower court ordered its takeover by the state government till the case is settled.