Hemant Soren arrived here in the afternoon and is also expected to meet Rahul Gandhi and Delhi Chief Minister Arvind Kejriwal and invite them for the function. 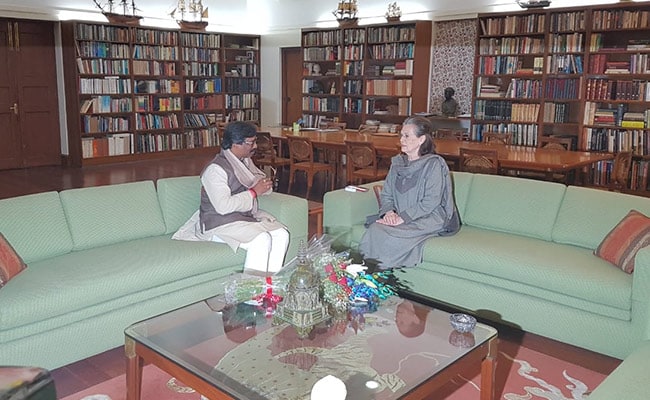 Hemant Soren will take oath of office on Sunday (File)

Mr Soren arrived here in the afternoon and is also expected to meet Rahul Gandhi and Delhi Chief Minister Arvind Kejriwal and invite them for the function.

He was accompanied by Congress leaders KC Venugopal and RPN Singh, who is the party's in-charge for Jharkhand.

Before the meeting with Sonia Gandhi at her 10 Janpath residence, Mr Soren had said it is a courtesy meeting.

Mr Soren also wanted to thank the Congress and its leadership for their support in helping form a coalition government in the state, sources close to him said.

The JMM-led three-party alliance stormed to power in Jharkhand on Monday, ousting the BJP in yet another state in the Hindi heartland state.

The governor's invitation comes a day after Mr Soren called on the govenor at Raj Bhavan to stake claim to form government, submitting a letter of support of 50 MLAs to her.

The pre-poll opposition combine bagged 47 seats (JMM 30, Congress 16 and RJD one) in the 81-member assembly, while the three-member JVM (P) has extended "unconditional support" to Mr Soren to form government.