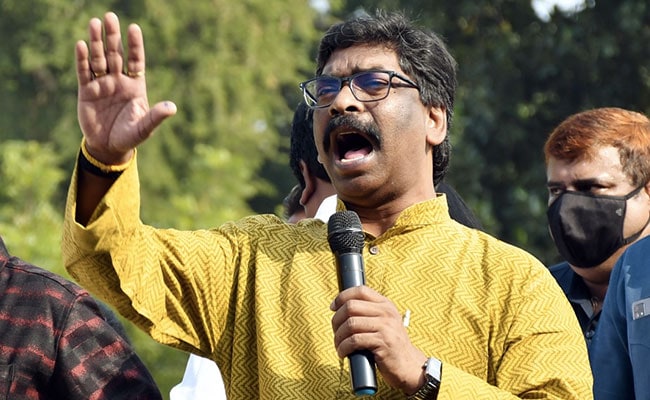 Mr Soren faces disqualification as MLA for allegedly granting himself a mining lease.

In a huge relief for Jharkhand Chief Minister Hemant Soren, the Supreme Court today allowed his plea challenging a Jharkhand High Court order against him in the illegal mining case. The High Court had held the Public Interest Litigation (PIL) seeking probe against Mr Soren in the alleged mining scam case maintainable.

"We have allowed these two appeals and have set aside the June 3, 2022 order passed by the Jharkhand High Court, holding that these PILs were not maintainable," the bench said.

The Supreme Court had earlier restrained the high court from proceedings with the PILs seeking a probe against Mr Soren in the mining lease issue.

Mr Soren faces disqualification as MLA on the BJP's complaint for granting himself a mining lease while holding office in 2021. The Election Commission has reportedly recommended to Governor Ramesh Bais that the action be taken against him. But the Governor has kept that hanging, even though Mr Soren has asked for the "envelope" to be opened immediately.

The Enforcement Directorate had earlier arrested his aide Pankaj Mishra and two others in the case, after raids in July and seizure of Rs 11.88 crore from Mr Mishra's bank accounts. The agency claimed to have found Rs 5.34 crore in "unaccounted" cash from Mr Mishra's home. Three months ago, the ED questioned Mr Soren's press adviser, Abhishek Prasad, too.

The ED reportedly also recovered a passbook of Hemant Soren and some cheques signed by him from prime accused Mr Mishra's house.

In its chargesheet, the ED claimed that Pankaj Mishra, the political representative of Hemant Soren, "controls" illegal mining business in the Chief Minister's assembly constituency, Barhait, through his accomplices.

Mr Soren has rubbished the charges, and called the latest ED summons "part of a plot to harass a tribal Chief Minister".

"If I am guilty, why are you questioning me? Just come and arrest me if you can," he dared the central probe agency.

"The BJP has unleashed central forces to destabilise a democratically elected Jharkhand government. I am not afraid of ED and CBI... This is misuse of constitutional institutions to suppress the voice of anyone who opposes them," he had said last week while addressing party workers.