In December, Asaduddin Owaisi had announced his party's intention to contest the next state elections in Uttar Pradesh as part of a front led by former BJP ally Om Prakash Rajbhar.

BJP MP Sakshi Maharaj took a dig at AIMIM chief Asaduddin Owaisi, predicting his participation in the Bengal elections will help the BJP win the state. Asked about the Hyderabad MP's presence in Uttar Pradesh, Sakshi Maharaj, who represents Unnao in the Lok Sabha, said, "It is God's grace. May God give him strength. He helped us in Bihar and will help in Uttar Pradesh and later in West Bengal too."

Following the BJP MP's comments, many on social media revived allegations calling Mr Owaisi the B team of the BJP, an accusation the AIMIM chief has faced in the past too - that his electoral success in places like Bihar helps the BJP.

Mr Owaisi had contested last year's elections in Bihar, which was said to have cut into the Muslim votes that go to the opposition, leading to the NDA's victory. His party won five seats in the Muslim-dominated Seemanchal region - a large figure given that the NDA won just 15 more seats than the Grand Alliance.

After the elections, the Congress and Lalu Yadav's Rashtriya Janata Dal had dubbed him the "B Team of the BJP". 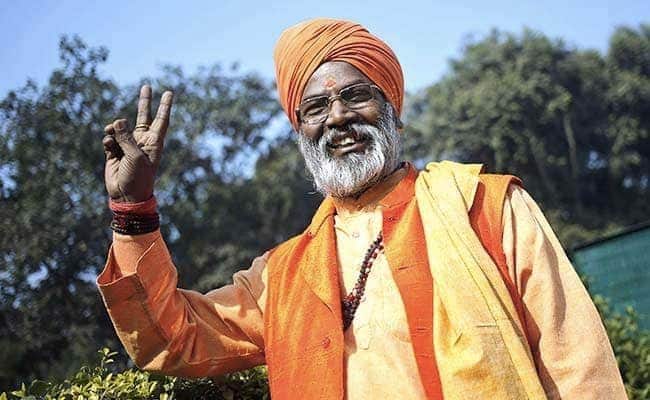 Sakshi Maharaj said Asaduddin Owaisi "helped us in Bihar and will help in UP and Bengal too".

In December, Mr Owaisi had announced his party's intention to contest the next state elections in Uttar Pradesh as part of a front led by former BJP ally Om Prakash Rajbhar. "We are now part of Mr Rajbhar's morcha," he had said after meeting the Suheldev Bhartiya Samaj Party (SBSP) chief.

On Tuesday, Mr Owaisi, accompanied by Mr Rajbhar, was on a day-long visit to eastern Uttar Pradesh, focusing primarily on Muslim-dominated on Azamgarh. Elections in the state are due next year.

Before that, he is throwing his hat in the ring in Bengal, which has raised concern in the state's ruling Trinamool Congress.

Bengal has 27 per cent Muslim population that is is part of the support base of Trinamool, which is facing challenge from the BJP in the state elections due in four months.

The AIMIM chief has said he is yet to decide whether he would contest solo in the state or form an alliance with another political party.

Earlier this month, during his first visit to Bengal, Mr Owaisi met Abbas Siddiqui, an influential Muslim cleric to discuss possibility of an alliance and accused the Trinamool Congress of failing to stop the BJP''s surge in the state.

The "B Team of the BJP" tag has followed Mr Owaisi to Bengal. "The AIMIM is nothing but a proxy of the BJP.  He is trying to forge ties with Abbas Siddiqui, but that won't yield any result. Muslims in Bengal stand firmly with Mamata Banerjee," senior Trinamool leader and party MP Sougata Roy has said.