HD Kumaraswamy met K Chandrashekhar Rao in Hyderabad on Sunday, the day on which the latter announced that he would launch a national party. 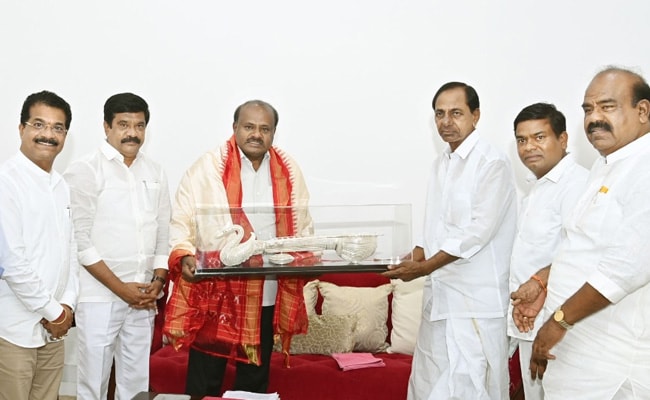 The former Karnataka Chief Minister met K Chandrashekhar Rao in Hyderabad on Sunday, the day on which the latter announced that he would launch a national party following more discussions with a cross-section of society.

"It is not the question of a third front, KCR (K Chandrashekhar Rao) has his own ideas on solutions for issues in this country. We had about three-hour -long one-to-one discussions yesterday. He has his own concept for the farming community and seven major cities in the country, and has his own thinking on how to go about implementing it, at the national level," H D Kumaraswamy said in response to a question.

Speaking to the reporters, he said he has sought JD(S)' cooperation in his endeavour.

"Based on the experience that we share, as a small party, I have assured all cooperation and to join hands with him in lending voice for the issues faced by farmers and people of the country," the son of former Prime Minister H D Deve Gowda added.

Seeking to provide a national alternative to BJP and the Congress party, the TRS supremo on Sunday said it would reach a consensus on "alternative national agenda," by continuing discussions with various stakeholders.