Clashes broke out briefly in Uttar Pradesh's Agra today afternoon as members of the Valmiki community faced-off with police over the alleged gang rape and murder of a 20-year-old Dalit woman from the state's Hathras district last month.

Visuals of the clash showed angry protesters throwing stones at the police and shouting slogans, while dozens of cops, equipped with riot gear and lathis, tried to restore order. The violence has been contained for now but there are significant police forces still deployed in the area.

The protesting members of the Valmiki community have also announced a boycott of cleaning works across the city. Visuals showed piles of waste and garbage by the side of busy roads.

The young woman, who died Tuesday at Delhi's Safdarjung Hospital, suffered fractures, paralysis and a spinal injury after a savage assault by four men from the so-called upper castes. The police said there was also a gash in her tongue; she had bitten it while being strangled.

Congress leader Priyanka Gandhi Vadra, who with party MP Rahul Gandhi and two others, on her way to Hathras to speak to the woman's family, attended a prayer meet at the Valmiki Temple in Delhi yesterday.

Mrs Gandhi Vadra, who has held UP Chief Minister Yogi Adityanath responsible for the tragedy, said she would "ensure justice for (her) sister".

Her first attempt, with brother Rahul Gandhi on Thursday, was stopped by UP Police who were caught on camera manhandling the Lok Sabha MP and pushing him to the ground. 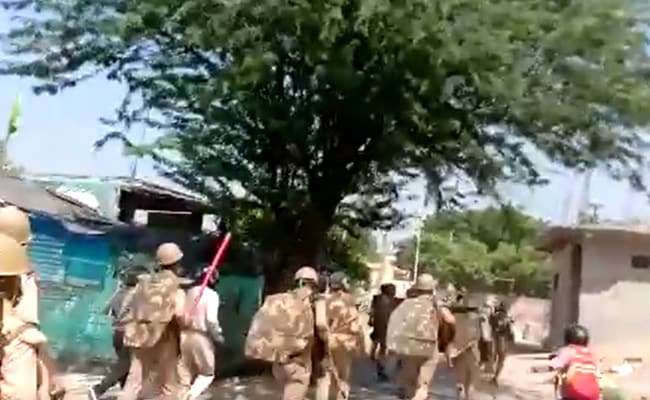 Earlier Mr Gandhi lashed out at the UP government, highlighting the caste angle and calling the Hathras tragedy a "shameful move... to suppress Dalits and show them their 'place' in the society".

Bhim Army chief Chandrashekhar Azad has demanded answers from Prime Minister Narendra Modi, remining him that he was elected to parliament by the same state that so brutally killed a Dalit woman.

The UP Police and government have been severely criticised over their handling of the case. The Allahabad High Court has summoned top officials on October 12, citing "allegations of high-handedness by authorities resulting in violation of basic human and fundamental rights".

Following the wave of criticism UP DGP HC Awasthy and Additional Chief Secretary (Home) Awanish Awasthi are expected to visit Hathras today - the first by such high-ranking officials.

The family of the young woman from Hathras has alleged multiple lapses throughout the case. They have also accused officials of locking them up in their homes and taking away their phones.

However, Hathras Joint Magistrate Prem Prakash Meena dismissed those allegations today, telling NDTV: "The allegations by a boy who spoke to some reporters on Friday are baseless. If a child can escape, it shows there were no restrictions on the family. No phones were confiscated".

Chief Minister Yogi Adityanath, who is facing calls to resign, claimed yesterday that his government was committed to the safety and security of women in the state.

The shocking attack has drawn parallels to the 2012 Delhi gang rape and sparked furious protests across the country. At one protest held at Jantar Mantar in the national capital, Chief Minister Arvind Kejriwal demanded the four accused be executed.