The centre had earlier postponed procurement of paddy till October 11 citing delays in maturity of the crop due to the recent heavy rainfall, but farmers protested this today 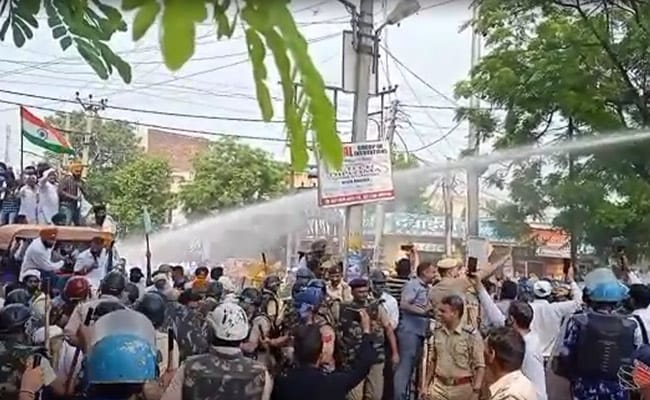 Paddy and millet procurement in Haryana and Punjab will start tomorrow "in the interests of the farmers", Ashwini Choubey, the Union Minister of State for Food, said Saturday afternoon after a meeting in Delhi with Haryana Chief Minister Manohar Lal Khattar and his deputy, Dushyant Chautala.

"As per decision taken, the Haryana has government has assured that paddy procurement will start from tomorrow (Sunday). They have made everything ready. Procurement in Punjab is already in process... from tomorrow both states will begin buying," he said.

"Due to delay in monsoon, the central government had postponed start of procurement of paddy and millet to October 11 from October 1 this year... There are demands for an early start. The procurement will start tomorrow," Mr Khattar confirmed.

Between 1,000 and 1,500 angry farmers were protesting the delayed purchase of their crops and signalled their intention to camp overnight.

Visuals from the area showed farmers, who were briefly doused with water cannons, standing on a pile of yellow police barricades and shouting angrily, while a handful of security forces in riot gear look on.

"We will take the paddy produced by us to the residence of the Chief Minister because he had said we can sell our produce anywhere as per the new law. Thus, we have planned to sell it today in front of his house," Jagdeep Singh Aulakh, a farmer union leader, was quoted by news agency ANI.

"To demand paddy procurement, farmers will protest outside the homes of BJP-JJP MLAs (in Haryana) and the office of the collector in Punjab tomorrow," he had tweeted.

The centre had earlier postponed procurement of paddy till October 11 citing delays in maturity of the crop due to the recent heavy rainfall.

Crop procurement in India is undertaken by the centre's Food Corporation of India, which works in tandem with state-level agencies. Paddy procurement usually starts from October 1.

The Congress (in the opposition in Haryana and in power in Punjab) had warned the centre that a large amount of paddy would go to waste if not picked soon.

"Lakhs of quintals of paddy had already started to arrive in mandis from September 20. Eleven days have passed since then but so far not a single grain has been procured (at MSP) in Haryana," Congress leader Randeep Singh Surjewala was quoted by news agency PTI.

He said earlier paddy procurement was to start on September 25 in Haryana.

Delhi Chief Minister Arvind Kejriwal has hailed the farmers "big victory" and called on the centre to also take back the farm laws.

"Big victory of the farmers' struggle... government took back the decision to postpone purchase of paddy by 10 days. I appeal to the government to now take back the three black laws and guarantee MSP," he tweeted.

Farmers in Haryana, Punjab and other states have been protesting the centre's controversial farm laws, which they say will eventually do away with the MSP, or minimum support prices, system, which is the minimum guaranteed price at which the centre buys their crops.

The centre has said the laws will not affect MSPs and has refused to rule out their repeal.

Multiple rounds of talks have failed to break the deadlock.